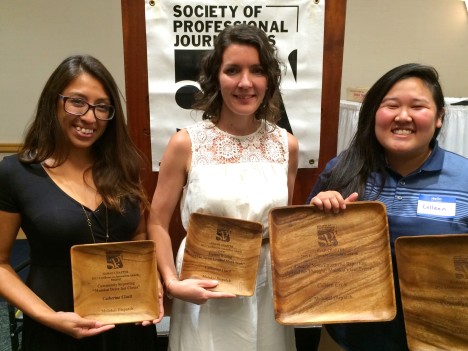 The Molokai Dispatch was honored with four Excellence in Journalism awards last weekend, at a dinner in Honolulu hosted by the Society of Professional Journalists (SPJ), Hawaii chapter. Awards were presented in newspaper, TV, radio and magazine categories, for news coverage during 2015. Molokai’s own weekly paper received two first place and two finalists awards. Over the last three years, the Dispatch has now received 13 SPJ awards.

Former Dispatch reporter Colleen Uechi, who now works at The Maui News, was awarded first place in the non-daily newspaper category for general news/enterprise reporting for her story, “Fuel for Thought: Molokai’s Gas Prices,” which printed last October. Judges called it a “well researched and reported look at gasoline prices.” The story examined the factors that contribute to the island’s high fuel costs and lack of statewide regulation in the industry.

Uechi earned another first place in the non-daily newspaper community reporting category for her coverage of Kapuaiwa Coconut Grove, a series that printed last year and looked at community concerns regarding the health of the historic trees and government and environmental action that followed.

Judges wrote in their comments, “A really terrific piece that led to major environmental changes. Good job!” The series concluded with a cleanup of the grove and a fence being installed to protect the delicate ecosystem and cultural sites.

Catherine Cluett Pactol, editor of the Dispatch, was also awarded for 2015 coverage. She received a finalist award for “Secret Lives of Monk Seals” that printed last May, looking at a program that placed “critter cams” on Hawaiian monk seals to gain insight into their daily habits, with video footage analyzed by local students.

Pactol also earned a finalist award for her story, “Molokai Drive Inn Closes,” about the shutdown of a local dining icon last year.

The Molokai Dispatch staff was honored to attend the SPJ awards dinner and represent the island and its local newspaper. We would like to thank Molokai residents, advertisers and subscribers for continuing to support the newspaper in its weekly coverage. We also thank the Hawaii SPJ for their recognition of our work.

In addition to the reporting staff who received the awards, we would like to recognize the rest of The Molokai Dispatch team that makes newspaper production possible. Sales manager Sarah Ching works with local businesses to make continuing weekly printing possible through advertising. Graphic designer Laura Pilz lays out the paper and designs advertising. Copy Center Specialist Tirzah Pactol offers administrative support while operating copy center services. Rick Schonely works in the community as a sports reporter. Majority owners Todd and Noelani Yamashita and minority owner Phil Pendergraft guide the business and support our staff. We would also like to recognize and thank our many community contributors who assist in sharing the island’s news.