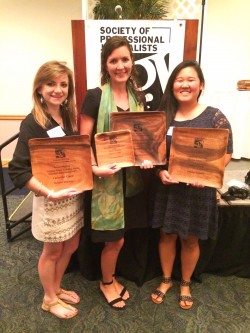 For the second year in a row, Molokai Dispatch staff were honored at the Hawaii Excellence in Journalism Awards banquet recognizing the state’s outstanding journalism for 2014. The newspaper received three first place and one finalist award in several categories at a ceremony held in Honolulu on June 26.

The Hawaii chapter of the Society of Professional Journalists (SPJ) annually awards the state’s finest media coverage in newspaper, television, radio, magazine and web. Last year, the Dispatch earned one first place and four finalist awards for its coverage in 2013.

“We are grateful to the Molokai community for sharing your stories and honored to represent our island’s newspaper among the state’s best,” said Dispatch editor Catherine Cluett. “We hope we can make residents proud that Molokai is home to an award-winning publication.”

“The winner, ‘Heroes Among Us,’ [gives] a very human, personal portrait of a veteran rejoining his community,” wrote the contest’s judges, who were from the Kansas City Press Club and the SPJ Connecticut Chapter.

In the General News/Enterprise Reporting category of non-daily newspapers, first place was awarded to “GE Crops Debate Shakes Molokai,” a series written by Cluett. Comprised of four stories that printed in the Dispatch from February to November last year, the series looked at social, economic and cultural issues surrounding the debate on genetically engineered crops that heavily impacted the Molokai community in 2014.

“Great work on this series of stories,” wrote the judges in their comments. “So many voices added depth to a topic that meant so much to your readers. This writer cover all the angles and did so with a clarity that brought everything into focus.”

Cluett was also awarded first place in the feature writing category for “Tagging Kioea: Learning about Molokai’s Rare Shorebirds,” and as a finalist in the same category for her story, “Ventures in Vanilla” about a local farmer who produces the bean extract.

“The Molokai community is so passionate and heartfelt, and it was wonderful to see their stories honored,” said Uechi.