New Store on the Block 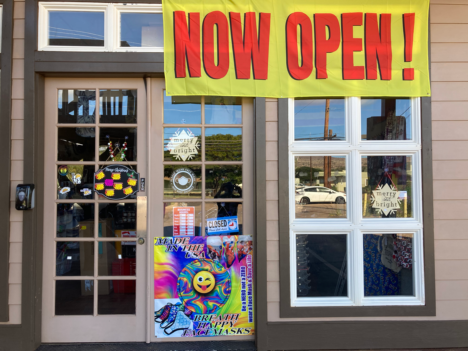 A new store has opened in Kaunakakai, offering “a little bit of everything,” according to owners Melissa and Gerard Almarales. Molokai Marketplace, located next to Dr. Dan McGuire’s office in the old Subway space, offers everything from toys, gifts, clothing, fashion jewelry and wrapping paper, to larger items in limited quantities, like TVs or bouncy slides. Gerard Almarales said he aims to keep prices low by carefully selecting goods and distributors, with many items priced under $5.

The store opened its doors two weeks ago but a grand opening event is planned for Dec. 1.

The Almarales family moved to Molokai in 2019 from Indiana, where Optometrist Dr. Melissa Almarales owned a successful eye care practice. They visited Maui in 2018, with a two-day trip to Molokai. Seeing a need for eye care on the island, she later returned for six weeks to offer free eye clinics for kids at Kaunakakai and Kualapu’u elementary schools, when they fell in love with Molokai, made connections at King’s Chapel church, and felt called to make the move. Melissa said they returned to Indiana, sold everything including her large optometry practice there, and just weeks later, she, her husband and young children permanently relocated to Molokai.

“We moved here because there was a need eye care – our hearts are for the community, to expand what’s available here,” said Melissa. “It bothered me so much that there was no eye care on Molokai [except for occasionally visiting doctors]. We only want to provide businesses that aren’t here already. We just want to make people’s lives better and help the community.”

“It’s been really rewarding… I love the people of Molokai and always feel appreciation when they come in,” she said.

Meanwhile, Gerard, who is from Trinidad and Tobago and whose passion and experience is in cooking, sought to open a Caribbean food restaurant on the island. He’s planning a take-out model which is currently awaiting county permit approvals and will be located in the back of the Molokai Marketplace shop, using kitchen equipment that is still there from the former Subway restaurant, he said.

While Molokai Marketplace is their first venture owning a store, Gerard is also putting to use his experience helping in his family’s store growing up in Trinidad as well as previously working in retail as a manager at Kohl’s. He said the main challenge of opening the business has been the added cost and “logistics of shipping to Molokai, which adds up a lot of expense.”

“So we have to be really diligent in selecting the right goods and shopping around with distributors to find the right price,” he said. In trying to keep many items priced under $5, he said he may not be making a huge profit on some sales so “you might lose on one item but get it back on another.” He said he’s learning by trial and error but is excited for what’s to come.

“It’s only going to get better,” Gerard said. “The community has been very receptive.”

He added he’s offering regular specials at the store which “people are very happy about,” such as spend $50 and get a $10 gift card.

Melissa described the shopping experience as similar to Marshall’s, where you might find things you didn’t even know you needed, and some items are only available as one or two of a kind.

The couple stressed they’re trying to find the needs on the island, give back to the community, and not duplicate what’s available at other stores.

And what about opening a retail business on Molokai in the midst of a pandemic?

“It’s all faith, we have a strong faith,” explained Melissa. “We are really blessed in the works of our hands because of God and we feel we’re in the place He’s put us…. We just have to be fearless.”