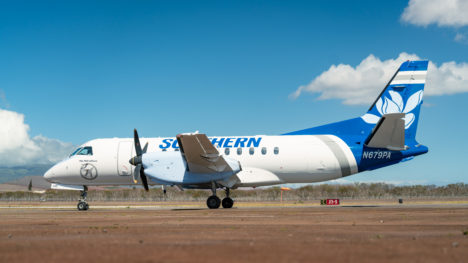 The twin turboprop Saab 340, operated under Mokulele’s parent company Southern Airways, is the first of two larger aircraft the company is bringing in to primarily serve Molokai and Lanai. Mokulele Chief of Staff Keith Sisson said the second plane will mainly be a reserve aircraft but on special occasions, both may be on the flight line at the same time.

“We are not going to publish a full schedule until the reserve plane arrives in September,” said Sisson. “The second plane is currently getting its seats reupholstered. It will be in tiptop shape by the time it arrives in Hawaii.”

“The first flight from Honolulu to Molokai was a full flight,” said Sisson. “The flight was opened for sale to the public five days prior to flight. On certain days, like last Thursday, we operate a scheduled flight from Honolulu to Molokai for the public. Following that flight, we leave empty and hop to Lanai, where we are picking up a large number of passengers that are going to Honolulu. It works really [well] to pair flights on the Saab with the popular travel times for each Molokai and Lanai, allowing us to serve the largest number of people. The flights are open to the general public and are ready for purchase.” 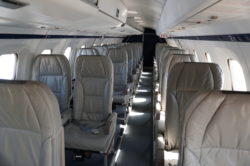 In a social media post on July 16,  Richard Schuman, Mokulele’s executive vice president, shared some details that are still being ironed out before full operation.

“Things like making the ramp work instead of walking up the stairs, little details like seat belt extensions, children’s life vests, how to handle luggage in that volume, now we need tug and carts to haul luggage, that requires station people training, ticketing, boarding passes, seat assignments, lots of little details so we’re going to practice with some other guys first” before opening up the full schedule for Molokai residents, wrote Schuman. “The website will clearly state which plane you are booking a reservation on — the Southern Airways plane is the big one, the Mokulele Airlines plane is the smaller one, what we currently fly. Mokulele will have way more flight time options.”

Schuman also pointed out the new Saab has less space for carry on baggage so passengers should be advised that they won’t be able to bring bags onboard that are as large as they are used to on the smaller nine-seat Caravan aircraft.

“The smaller plane has a lot more seat and leg room,” he said. “There is an overhead compartment [in the new plane] but most of your purses wouldn’t fit, opening is about six inches. On the floor, under your seat, maybe 12x12x12 would fit. What you could carry on the small plane you are probably not going to be able to carry on the big plane.” 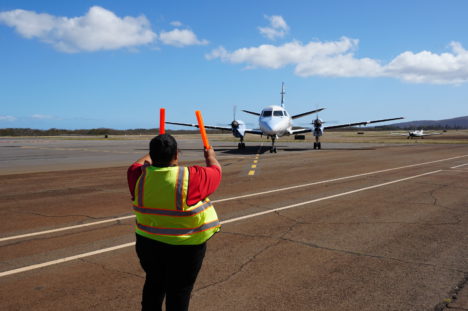 The new plane, however, will more easily accommodate wheelchair-bound residents and passengers of size – a challenge the Molokai community has been grappling with since ‘Ohana by Hawaiian stopped service in early 2021. Mokulele’s fully compatible ramp allows passengers a smooth transition from the tarmac to the aircraft.

“It’s exciting for all of us, for sure,” she said last Thursday after the first landing. “We got it, we seen our crew… they’re pretty good for the first run.”

Tickets on the new planes are priced the same as current fares, available on MokuleleAirlines.com.