Each weekend, community members and organizations host gatherings at the pavilion of Kiowea Park, causing a strain on the building built half a century ago. Kalama`ula homesteaders are trying to ease that strain by building a second, larger pavilion with updated facilities in the park, which is located in the Kapuaiwa Coconut Grove area. 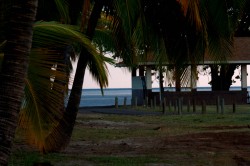 There could soon be another pavilion in addition to the current one at Kiowea park.

County councilmember Stacy Crivello presented the plan for the new pavilion to the Molokai Planning Commission for comments May 8. As a Kalama`ula homesteader, she is acting as a project coordinator for the new facility.

“It’s been well used, and it’s continually overused at this state,” she said about the existing pavilion, which was built in the 1960s and renovated in the 1990s. The 700 square-foot existing pavilion will remain, but a new, 4,000-square-foot facility will run adjacent to it, the two buildings cornering the parking lot, according to the Draft Environmental assessment prepared by Crivello and Luigi Manera of Architectural Drafting Service.

“The park’s amenities currently include outmoded restrooms, aging barbeque grills and an undersized sheltered pavilion,” the assessment states. “The park facilities are in demand due in part to their central and shoreline location, and also due to relatively low rental rates as well as the limited nature of facilities elsewhere on the island.”

The new facility will include a pavilion, certified kitchen, restroom facilities, individual wastewater system and parking, drainage and landscaping improvements. The new facility is the second phase of a 1998 improvement plan that the Kalama`ula homesteaders are reviving. Crivello said she hopes they can begin construction this year.

“We’ve been waiting a long time, and we’re anxious to get this done,” she said. After Crivello and Haliniak-Lloyd presented the plan, the commission had the opportunity to comment on the project. There was unanimous support.

“I can see nothing but good things coming out of this,” said commission Vice Chair Michael Jennings.

The Department of Hawaiian Homelands (DHHL) authorized the Kalama`ula Homesteaders Association (KHA)  to manage Kiowea Park in 2010. The KHA partnered with the State of Hawaii, DHHL, Hawaii National Guard and Maui County Public Works for the project.

Construction of the pavilion will not involve loss or destruction of any natural or cultural resources, harm to public health or require substantial energy consumption, according to the assessment.