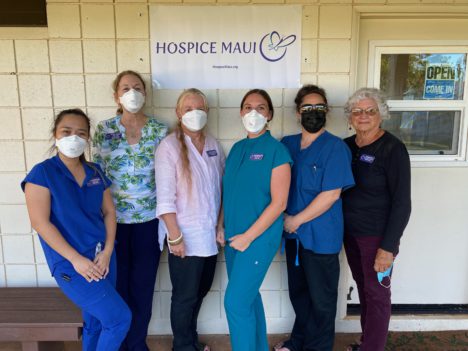 Having the support and care to spend one’s final days in the comfort of your own home is a gift that’s given by hospice staff on Molokai. And it’s a gift that can continue being offered on island thanks to the umbrella of Hospice Maui, a new partnership that was launched last week.

Previously, hospice services on Molokai operated under Hospice Hawaii for several decades, which rebranded as Navian at the end of 2019. The unification under Hospice Maui, an organization which has served Maui for 40 years, will now offer services across Maui County, taking over Navian on Molokai and Lanai.

“All our local staff is still the same, the services will be the same on Molokai,” said Hospice Maui, Molokai Bereavement Coordinator Barbara Helm. “It’s a wonderful transition, and as staff we are excited and looking forward to working with Hospice Maui as one family in the County of Maui.”

Helm said Molokai’s hospice services got started as a small, local group called Compassionate Care ‘Ohana, which provided support and services to those that were homebound or ill “because we could see it was a need on our little island.” The group originally reached out to Hospice Maui, she said, but that organization was too small at the time to assist in providing Molokai hospice services. Hospice Hawaii was able to incorporate Molokai under its umbrella.

Hospice Maui CEO of more than 30 years, Greg LaGoy, had been wanting to operate the Molokai program for some time, and over the past year, Hospice Maui has been working with Navian to make the transition. LaGoy passed away suddenly last month, and last Tuesday on Feb. 1, his vision of uniting Maui Hospice with Molokai became a reality, said Melanie Dwyer, Interim CEO of Hospice Maui.

“This has been such a passion project for all of us for a while now,” said Dwyer, who is also a registered nurse and had been working with Hospice Maui as clinical director. “It was a longstanding vision of our late CEO… This week was a huge milestone for us, it was very heartfelt for our team getting to enact and make that vision and dream of Greg’s become a reality.”

During the transition, the Molokai program has retained all of its core staff – Maile Silva, certified nurse aide, Patty McCartney, social worker, and Helm – as well as maintained partnerships such as with Molokai Drugs. The drug store provides medications and first aid supplies for Hospice patients as well as durable medical equipment, like electric beds, wheelchairs and lifts.

“It is so important for our families to know that we have had hospice on Molokai for many years,” said Kimberly Svetin of Molokai Drugs. “Sometimes, we do not know about hospice services until it is too late. Thank you, Hospice Maui, for providing services for our island; we are so fortunate to have this gift.”

“Frank is the most critical member of our team, he delivers and fixes everything,” said Svetin. “Hospice people are literally angels on earth and I feel that about Frank, too. He’s amazing…  Over the years, Frank has helped hundreds of families on Hospice.”

For those who decide they don’t want to be in the hospital anymore, Hospice offers an alternative care not only for the patient but also to support their family.

“That’s part of our service, to bring in the service to the home so they don’t have to go to the hospital anymore, to the ER anymore — the clinical team comes to them to their home to provide that service and educates the family on how to take care of their loved ones,” said Helm.

A challenging month-long transition period took place between Navian’s departure at the end of last year and Hospice Maui’s launch this month, leaving Molokai staff with the heartbreak of having to tell new patients that they couldn’t bring them on, said Helm. Navian gave no community notice of the changes, and left Molokai staff with no guidance. Molokai Hospice staff and Molokai Drugs still offered support and referrals during this time, but it drove home the importance of Hospice services on the island.

“They welcomed us as staff abundantly with goodness, their energy is so positive and welcoming and kind and caring. It’s a big change for us,” she said.

A blessing was held at Hospice’s Molokai office at the Molokai Community Health Center last Tuesday to mark the occasion.

Dwyer shared a hopeful vision of the future.

“I look at it as the beginning of a great adventure, as we build and grow the teams, connect and build relationships with community partners [on Molokai] and from the community itself, learn how best we can support — things are going to grow and develop over time,” she said.

Hospice provides services in the last months and weeks of life and supports both the patients and their families, allowing patients to live each day with meaning and purpose, in accordance with their deeply held values and beliefs, said Dwyer. She added that you get a “whole team to help support you” that includes nursing, social workers, spiritual care, medical supplies and equipment as well as a 24/7 on-call support just a phone call away. Hospice services are provided free of charge to patients, paid for by Medicare.

“It’s a misconception that somebody has to be very close to come onto Hospice,” said Dwyer. “When the goal changes to ‘I want to stay at home, my focus is on being comfortable, spending time with my family,’ those simple goal changes for medical care is what should trigger someone to think it’s time to have Hospice.”

And for Molokai residents, being home often means even more after hospitalization off-island.

“When that plane landed on Molokai after being in the hospital for weeks, just to be able to be home on Molokai was a quality of life experience for them,” said Helm of seeing loved ones coming home. “And that’s what’s so important at the end of life, to provide that quality of life each day, one day at a time.”