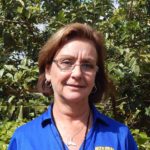 Dawn Mains assumed the position of new principal of Molokai Middle School at the beginning of this year, and having settled into her new role, gives “thanks every day that Molokai chose me.”

The former vice principal at Lahaina’s King Kamehameha III Elementary School said she first visited Molokai three years ago during a leadership development camp for school administrators and felt a special connection to the island.

“I just put it on my heart that I think I’d like to live there one day,” she said. “I prayed about it, put it out to the universe.”

When former MMS Principal Gary Davidson decided to take a job with an educational support business at the end of last year, Mains jumped at the opportunity to fill the opening. Davidson calls her an ideal match for the job.

“Dawn Mains is the perfect new principal for Molokai Middle School,” he said. “She has that great balance critical to being an effective principal these days, relying on the school team when decisions and plans are best shared, and leading with firmness when something requires the principal to act decisively.”

Mains said it’s not unusual for principals to start a new position halfway through the year. With everything on track for the rest of the year as outlined by the previous principal, she said it gives more time to settle in before making big decisions about the next school year. She added that MMS faculty set those tracks well.

“Davidson and the staff have done a good job putting the pieces in place… my ultimate goal is to help the staff understand all these pieces and how they all align,” said Mains.

The overall goal is being able to provide a foundation – academically, socially and behaviorally — for kids to be able to participate in society, according to Mains. She stresses self-directed learning and helping students “organize themselves to learn how to learn” and apply that learning to any situation – a skill she said will help them in their future lives.

She sees the role of principal– in addition to taking care of the business aspect of running school — as that of a colleague to teachers and staff.

“I’m on just as much a learning curve as everyone else in getting kids ready for jobs that haven’t even been invented yet,” she said.

While Mains’ most recent job was a vice principal at an elementary school for five years, her previous experience prepared her well for working with the middle school age group. As a math teacher, she taught both middle school and high school students, and before taking an administrative roll, was a middle school teacher for seven years, she said.

So far, she’s adjusting well to her new role in guiding both middle school students and staff.

“The transition has been fairly smooth,” said MMS Academic Counselor Mike Kahale. “Everyone has a unique leadership style and with her background as a VP she seems to be firm on discipline, which I really welcome… I anticipate a great working relationship.”

Over the last five years, MMS has seen a lot of positive changes. In 2010, the school was among the bottom five schools in the state. When Davidson came on as MMS principal the following year, he said he set a goal to change that.

In 2012, MMS was recognized by the Department of Education as the most improved school in the state. Not only did they make Adequate Yearly Progress standards for the first time since they separated from the high school in 2004, but they made significant improvements in both reading and math.

“We dream big here,” said Davidson during the academic achievement celebration that was held. “Last year’s students not only hit a home run but they knocked it out of the park –they had double digit gains in every subject tested.”

MMS students have also represented the island at state, national and even international science events and other academic competitions.

Mains said of all its accomplishments, she’s most proud of the school’s focus on Hawaiian culture.

Mains, originally from Oahu, has lived in Hawaii since 1985, and when it comes to Molokai, she said her “plan is to stay right here.” Her husband, a photographer, still lives on Maui and Mains said they plan to visit each other regularly. She also has two grown daughters.

In addition to her new role at MMS, she’s working to finish a doctorial in educational leadership, which she hopes to complete by the end of this year.

“I landed in a really sweet spot,” said Mains. “I thank every day that Molokai chose me.”