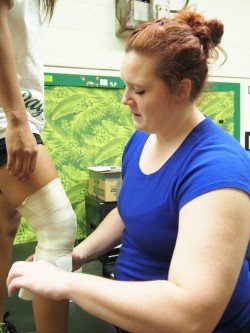 Dalyann Barnett arrived on Molokai from Ohio on a Monday two weeks ago, and started work as Molokai High’s new athletic trainer the same day.

The school’s athletes have been without a trainer to ensure their health and safety during training and sporting events since last year. Before that, it had been two years since an athletic trainer had worked on campus.

“Dalyann is a gift from heaven,” said MHS Athletic Director Hoku Haliniak. “We now have someone on staff that will be able to assist our student-athletes and their injuries.”

Barnett moved to Molokai with her three-year-old and her fiancé.

“My family and I are really outdoorsy — we fish and hunt — so it’s nice to be here,” she said. “I’m young… so it’s easy to move. I thought it would be a good career opportunity.”

With a Master’s degree in education with a background in sports management, Barnett worked for two years as a graduate assistant at Ohio’s Wright State, then as an athletic trainer with a high school softball team.

She said she heard about the opening at MHS through Wright State alumni who had connections at the University of Hawaii.

She said she’ll bring more than just her job description to the school.

“I work well with kids in training but also try to be a mentor for them,” she said.

She added she’s found the people on Molokai to be “so nice, kind and open” so far as her family settles in to a new lifestyle.

Barnett said she plans to stay on the island at least five years, and “see how it goes.”