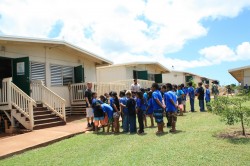 Academic achievements and growth will be looked at differently this school year, leaving the Department of Education and Hawaii teachers with extra homework but optimistic predicted outcomes on Molokai.

The state Department of Education (DOE) received federal approval to implement the Strive HI Performance Strategy this 2013 school year. In May, Hawaii and two other states were granted federal No Child Left Behind (NCLB) waivers to follow their own school improvement plans. The strategy holds schools accountable to achieve new, multiple standards to measure growth and college and career preparedness, rather than relying solely on test scores to quantify achievement.

The Strive HI Performance Strategy consists of three primary components—new yearly goals and targets, multiple measures of achievement, and a plan to reward success and to support schools who struggle.

Tools to Gauge Success
Previously through NCLB, students grades three through 10 were tested once a year through the Hawaiian State Assessment (HSA). The federally-set goal, or Adequate Yearly Progress (AYP), was the only measure of a student’s success—either they made that goal, or they didn’t.

Under Strive HI, an analytical tool called the Strive Index will focus on each individual student’s progress in the classroom by looking at HSA scores as well as other variables to create a more comprehensive picture.

HSA reading and math scores, as well as science assessments, will be used to measure each student’s achievement. HSA scores will be recorded over time in grades four through eight and grade 10 in order to measure growth.

A student’s readiness for college and careers will be tested through elementary school students’ chronic absenteeism rates (15 or more absences per student annually), eighth and 11th grade ACT scores in reading, English, math and science, high school graduation rates, and college enrollment. Finally, the achievement gap between student subgroups and how well a school is narrowing those gaps will be taken into account.

“We expect to do very well in the new system, since it does take into account things such as attendance rates, the narrowing of the achievement gap between high performing and low performing students,” said Molokai Middle School Principal Gary Davidson. “Since we have very few of our students performing on the HSA at the “well-below proficiency” level, we should do well when all things are considered.”

Strive HI for New Goals
Under NCLB, Hawaii schools were required to follow increasing AYP targets, adhering to a national goal of 100 percent student proficiency in reading and math by 2014. The Strive HI Performance System’s annual measurable objectives (AMOs) have been customized to make goals more attainable based on each school complex’s current performance.

Updated in July 2013, the DOE set a goal for Molokai schools to have a student proficiency rate of 68 percent in reading, 61 percent in math, 29 percent in science, and an 84 percent graduation rate during the 2013-14 school year. By 2018, the statewide goal is to reach a 90 percent high school graduation rate as well as reduce the current percent of non-proficient students in math and reading by at least half.

“I think it’s a better representation because it allows for growth,” she said. “If you’re dealing with a population that’s already at a disadvantage, at least if a school does make growth in what is considered to be a disadvantage population, you really have a good chance to show that you are a good school because of the growth factor.”

Steps for Labeling School Status
After each school’s Strive Index data is gathered, the Strive HI Step System will place each school on a five-step scale indicating where each school ranks with others in the state. How well the students progress each year will determine the amount of achievement recognition the school receives or the amount of state support and intervention required to facilitate their students’ scores.

“Too often, struggling schools were given extra funds and extra personnel support,” said Kaunakakai Elementary Principal Janice Espiritu. “Schools that got out of [poor score standings] did not have that level of support. The Strive HI five-step process will take the first step in addressing the issue of equity and equality.”

New Goals are M.I.A.
Schools’ Strive HI Index scores and the Strive HI Steps were projected to be announced in July to prep for the 2013-14 school year. According to DOE Communications Director Donalyn Dela Cruz, the department met and worked with school administrators over the summer to ensure they were set up for success to take on the new standard. However Dela Cruz said compiling the data is taking longer than the department anticipated.

Dela Cruz predicted that the index score should be available within the next two weeks. Until then, Molokai teachers and principals are unsure how the new standards will affect teaching strategies. Nonetheless, many see the changes as a step in the right direction.

“We are proud of the work happening at every level of Hawaii’s public education system to prepare students for real-world demands and provide better data, tools and support to students, educators and schools,” DOE Deputy Superintendent Ronn Nozoe said a May news release. “Now, with the approval of the Strive HI Performance System, we’ve unlocked the potential of all these efforts to work together in a coherent way to support success.”