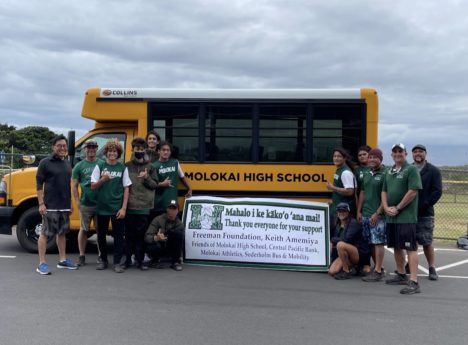 A new bus has arrived to safely transport student athletes on Maui when they travel there for competitions.

Molokai High’s athletes travel to Maui to compete in several sports during each season. MHS Athletic Director Lee DeRouin said the school already had a bus on Maui that was purchased in 2016 and is still in use. But with the increase of student athlete participation and new sports added in recent years, the athletic department needed another bus to safely transport the students and coaches.

Both students and coaches are grateful for the new ride. Coach Kabbie Juario-Bicoy has traveled to Maui with her teams multiple times and knows the importance of getting from point A to B safe and smooth.

“We are very excited to now have a brand new reliable bus in Maui,” said Juario-Bicoy. “As well as having AC, the team was very excited about not having to put their windows down. They could be more comfortable and well rested before their competition.”

It’s taken many hands to make the new bus a reality.

During the Spring season 2021, Molokai High hoped some allocations could be used to purchase a new school bus, however the allocations could not be used for that type of purchase, according to DeRouin. So the Athletics Department reached out to someone they thought could lend a hand.

Keith Amemiya is a businessman and former executive director of Hawaii’s High School Athletic Association. DeRouin said he has been a longtime supporter of Molokai High’s athletics.

“Keith was more than willing to keep the momentum going for us and get us to the point where we are at today with a new school bus,” said DeRouin.

Along with Amemiya’s assistance, Friends of Molokai High and Middle Schools Foundation also contributed financially to make the bus purchase possible, along with Freeman Foundation and CPB Foundation.

The 2016 bus was purchased with the support of Molokai Drugs and Friends of Molokai High and Middle Schools, according to DeRouin.