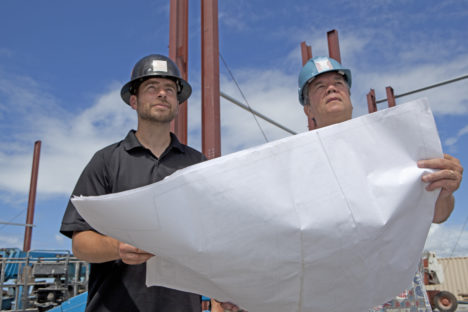 Photo courtesy of Makani Kai. William Crocker, left, of Hawaii Industrial Structures and Richard Schuman, president of Makani Kai Air, review plans for the new airline terminal being constructed at 100 Kaulele Place at the Honolulu International Airport. The facility is expected to be completed early in 2017.

Construction has begun on a new terminal at the Honolulu International Airport for Makani Kai Air. The facility, which will be four times the size of Makani Kai Air’s current home, is located at 100 Kaulele Place.

“We’re excited to be moving the airline operation to a new home,” said Richard Schuman,
president of Makani Kai Air. “It is being purpose built and therefore will be better able to handle
the daily traffic and unique requirements of inter-island air travel.”

Makani Kai Air is currently housed at 130 Iolana Place, a facility completed in 2009, which was designed expressly for helicopter tours. After the new building is completed and Makani Kai Air has moved, Makani Kai Helicopters will remain in its current location.

The new Makani Kai Air building includes over 40,000 square feet under roof and will feature a mezzanine and second floor. The passenger and baggage drop off area will be covered from the elements, and aircraft access to the airport’s south ramp will be greatly improved. In addition, the new building includes enough hangar space to accommodate two aircraft indoors for maintenance.

“It’s been helpful to operate our airline for a few years in our current location to determine what would work best in a new facility,” said Schuman. “We’ve learned a lot and this new building
includes many passenger amenities that have been lacking, such as charging stations for phones
and iPads, more flat screen televisions, and panoramic views of the runways.”

Makani Kai Air provides daily round trip service between Honolulu and topside Molokai, Kalaupapa and Kahului, Maui. The airline recently added six roundtrip flights daily between
Honolulu and Molokai, bringing the total to 19 roundtrips on Fridays and 17 on Sundays.

“Our growth has been notable,” said Schuman. “Over the past 12 months, we’ve carried nearly 52,000 passengers, a 24 percent increase from the previous 12-month period.”

Schuman attributes the popularity of Makani Kai to the loyalty of the people of Molokai. “We’ve
established ourselves as their go-to airline.”

Perhaps best known as the local airline with fixed airfares, Makani Kai Air’s online fare for flights between Honolulu and Molokai and Molokai and Maui are just $50, including all taxes
and fees, for every seat on every flight every day. Located on the south ramp of the airport,
Makani Kai Air is able to dispense with TSA lines and passengers are encouraged to arrive just 15 minutes prior to departure.