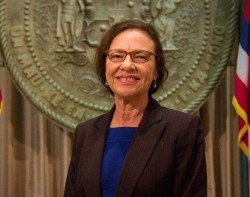 For the first time as the state’s new Department of Health (DOH) Director, Dr. Linda Rosen visited the Kalaupapa settlement last week and was warmly welcomed by residents.

“I want to tell you all how delighted I am to be here, what a privilege it is to be the director, especially because of the special role that the director plays for the community of Kalaupapa,” Rosen told patients and employees at a community meeting in the settlement. “I’m very lucky that the governor appointed me. I… thank [Kalaupapa] for welcoming me so graciously. I look forward to helping in any way that I can.”

Rosen was appointed by Gov. Neil Abercrombie in February to fill a vacancy created by the death of former director Loretta Fuddy in a plane crash off Kalaupapa last December. When the governor’s term ends in one year, Rosen, a political appointee, may be reappointed for a longer term of service.

“Linda has more than 30 years of experience in the medical field and has held administrative positions for more than a decade,” Abercrombie said in February. “Drawing from existing leadership within the Health Department, I have full confidence that Linda will continue the significant progress realized under late Director Loretta Fuddy for the remainder of her term.”

Rosen is not a new face to Kalaupapa residents. Working with the DOH since 2000, she served as the deputy director for Health Resources Administration from 2005 to 2007 and handled various issues in Kalaupapa, visiting the settlement on a number of occasions.

“During that time I learned a lot about the community, I met many of the patients, and I really cherish that time,” Rosen said. “I’m very thrilled to be back.”

She resigned from that position and soon after became the DOH chief of the Emergency Medical Services and Injury Prevention System Branch. In this position she was responsible for administering a comprehensive emergency medical services system, including 911 ambulance services, trauma system development and community injury prevention.

Rosen’s experience is vast. She has worked as a pediatrician in the emergency and critical care and neonatology departments at the Kapiolani Medical Center for Women and Children from 1985 to 2000. Additionally, she has been a faculty member of the John A. Burns School of Medicine since 1987, as assistant and associate professor of pediatrics.

She said she plans to work for Kalaupapa patients as long as she holds her new position.

“It’s sad that some of the patients that I knew have since passed but my goal is to do my best for the ones that are still here and also for the legacy,” Rosen said. “I’ll do my best in this year, and if given the opportunity to go on longer, then that’s just more time for me to work on the issues that are important to the patients.”

As director, Rosen said she will make sure there are government officials in the legislature that understand the DOH’s obligation to Kalaupapa. She added she urges state employees and administrators to be open and transparent with her to achieve this goal.

“It’s a very unusual place to work because the community is so isolated and the boundaries between employees and patients are more vague I believe here because it is a community where everybody lives together 24/7 and so much time is spent together,” Rosen said. “That is a very unique situation that provides some unique challenges but I think also some benefits.”

Rosen will visit Molokai topside for the day on July 30 to meet with DOH workers, Molokai General Hospital staff and other healthcare providers.