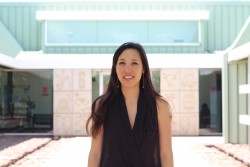 This month, Kelley Dudoit officially stepped in as Coordinator of the University of Hawaii’s Maui College, Molokai site (UHMCM). And while new to the job, the Molokai High graduate and seven-year UHMCM employee is no stranger to the community she serves.

“Kelley is the best of both worlds, both Molokai and UH,” said former coordinator Donna Haytko-Paoa, who retired at the end of last year. “She’s about staying on the island and taking the long haul.”

After Haytko-Paoa retired last year, Dudoit applied for the coordinator position, and she underwent an interview with a screening committee before being chosen. Her first day of work was April 1. Dudoit, who previously held the position of Institutional Support at the college, said her career in education has been an unexpected path that she grew to love.

“If anybody ever asked me what I wanted to be when I grow up, I would never have envisioned that this would be my future,” said Dudoit. “… Once I started [at the college] I immediately loved it. It serves a good purpose for the community. It’s just a great fit and I may be here for the rest of my life.”

Dudoit was born and raised on the island, and after graduating from Molokai High School in 2001, she went on to receive her Bachelor’s in business management from Chaminade University in 2004. She said she always knew that she wanted to come home to Molokai, and after two years at a marketing company on Oahu, she was more than happy to bring her skills home in 2007 to write grants and promote academic programs and student activities within the community.

“Kelley has been an asset to the UHMC Molokai Education Center since her start in an instructional role in 2007,” said John McKee, vice chancellor of academic affairs at the University of Hawaii’s Maui College. “… Her experience, student-centered approach, academic background and leadership skills make her a great fit for this position.”

McKee said Dudoit “played an integral role in the center’s long range development plan,” while at her job. She worked closely with Haytko-Paoa to manage the center’s operations, he added, and earned recognition as a University of Hawaii Community College Leadership Champion from 2012-2013.

“We had a very honest relationship,” said Haytko-Paoa. “We didn’t always agree. I liked that she had an opinion.”

The new coordinator said that while she was excited to take the job, she was also mindful of the hefty duties that would come with leading a campus on the verge of expansion.

“I know it’s a big responsibility and this person has a kuleana to fill to the community,” said Dudoit. “… I knew that I would be stepping into a lot of work, and I have big shoes to fill.”

Over the past 30 years, UHMCM has grown from borrowed classrooms to its own, state-of-the-art instructional facilities on a two-acre campus. During her term, Dudoit wants to continue carrying forward the college’s long-range development plan, which includes expanding to five acres and adding two new buildings. Dudoit added the college also has a 500-seat auditorium planned for one of the buildings, which she feels “would fill a huge puka in the community.”

“This building is great, but I think we’ve outgrown this space,” she said.

However, because UH imposed a three-year moratorium on construction new buildings in 2013, Molokai’s campus will have to wait at least a year or two before development can start.

In the meantime, Dudoit’s short-term goals include building upon local expertise to add new academic programs. Dudoit said recently members have been applying to teach courses the college doesn’t yet have, including music.

“I think it’s really good that as our community changes or as people get more qualified in their positions that they come in to the college and express interest in lecturing,” said Dudoit.

Dudoit herself is also an instructor, teaching courses that prepare students for the workforce and help them market their professional skills online. Technology is a subject for which she has a personal passion. Last year, she completed her online Master’s in Educational Technology through UH-Manoa, and said without these types of “distance programs” she would never have been able to complete her Master’s, since moving or traveling each week wasn’t an option.

With an eight-month-old daughter and five-year-old son at home, Dudoit said her new role is a challenge she couldn’t have shouldered without the support of her family, especially her high school sweetheart-turned-husband, Kaipo.

“Before I even applied I asked my husband, ‘Are you on board with this? Because it’s gonna take some teamwork to get all of this done,’” said Dudoit. “He said, ‘Yes, I support your career.’ … I couldn’t have achieved any of this without him.”

Haytko-Paoa feels there is “a bright future for higher education on Molokai,” with a team of experienced and supportive staff at Dudoit’s side, including long-time assistant professors Susan Natartez and James Boswell and Stephanie Dudoit–Kelley’s aunty through marriage–who has been at the college for 27 years. Kelley, said, Haytko-Paoa, will be able “to honor everybody who has worked there before her, to honor the vision of a community.”

“… Being from Molokai, you have the heart and soul [of the island], it’s in you,” said Haytko-Paoa. “She wants to do what’s right for the community.”