July 11 marked what Kalaupapa’s new Catholic priest believes is the fulfillment of his destiny. Father Patrick Killilea was installed as the pastor of the peninsula’s St. Francis Church, replacing Father Ambrose Sapa, who was reassigned to serve on Oahu. 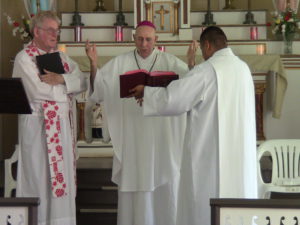 “My story really begins in Kalaupapa in the summer of 2004,” said Killilea, a native of Ireland who had been serving in Massachusetts. He had come over to Kalaupapa to visit fellow members of the Sacred Hearts order — of which St. Damien was also a member.

“The words… ‘Damien the Blessed’… nearly brought me to tears,” he said. “I knew [then] I was destined to be here.”

In 2006, he was asked to fill in as pastor at St. Francis Church in Kalaupapa over the summer months. A year later, Killilea mentioned to his Provincial Superior at the time — Father William Petrie, who was just installed as pastor of Molokai’s topside St. Damien Parish — that he would like to be transferred to the island permanently. Last year, the request came true when current Provincial Johnathan Hurrell assigned him to Kalaupapa.

“It feels wonderful,” he said of his installation. He now serves the settlement’s 20-some Catholic parishioners, which he said includes 6 to 7 patient residents. Killilea lives full time on the peninsula, but said he will do some traveling as part of his ministry.

“My hope is to help raise the spirits of patients and workers… and bring a type of humanness that comes from someone who grew up on a farm in Ireland,” he said.