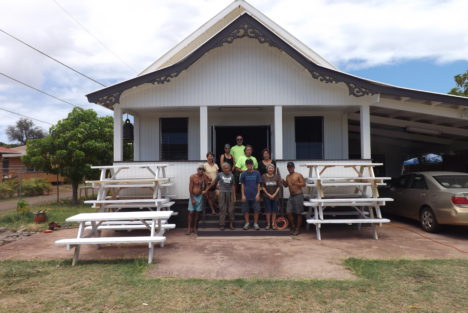 Early last Sunday morning, community members gathered at Molokai’s Guzeiji Soto Mission in Kaunakakai with shovels, rakes, tree saplings and lots of food. After digging up weeds and planting trees along the fence, the volunteers then moved picnic tables built and painted by Molokai High School students. Although much had been done at the Buddhist temple, the day represented just a small part of the large-scale project currently underway at the Soto Mission.

Suzanne Langford, president of the Alana Ke Aloha: Krause Family Foundation, and Lisa Takata, president of Molokai’s Soto Mission, are co-directors of the new project at Guzeiji. Recently, the Buddhist mission has sat largely unused, especially with cancellations of the last three Obon Festivals – popular community events normally held each summer — due to COVID. However, all that is about to change thanks to Langford and Takata’s current efforts.

One of only nine Soto Missions in Hawaii, Molokai’s Guzeiji Soto Mission dates back to 1927. It was established as a way for Japanese immigrants to connect with home and continue raising their children with Japanese customs, according to Takata.

“When the plantation workers were here, they didn’t have families, so [the Soto Mission] was their family,” she explained.

Recently awarded three grants, including an AARP community challenge grant, the Soto Mission is in the process of dedicating a new space and era in its history. The grants will be used to fund multiple projects, including a digital literacy program for seniors and a garden space that is engaging and interactive for people of all ages, but especially young people.

“The main idea is just to bring people to someplace safe where they can interact with others,” said Takata.

Langford and Takata hope the Soto Mission will serve as a meeting place, where young people feel free to access a space that they participated in creating. Engaging with youth and changing the connotation of community service from punitive to positive is a driving goal of the new project.

“The Mission changes with the needs of the community,” explained Langford.

And because the needs of the community have changed, the Soto Mission is also changing. As such, Langford and Takata hope to introduce movie nights with fun foods, and classes such as Zazen meditation, ikebana flower design, Japanese language, cooking, dance and more.

The Soto Mission is uniquely situated to serve the needs of the community as it occupies a central location both physically and in memory. Beyond being situated right in the center of Kaunakakai on Hotel Lane, Takata points to the cultural significance the Soto Mission has embodied previously — it was a space where multiple generations could gather, especially for events like the Obon Festival.

Not Buddhist? No problem.

“You don’t have to be Buddhist to participate,” assured Takata. The Soto Mission is open to all.

Takata and Langford plan on starting meditation classes as early as October, but are marking Nov. 12 and a visit from the bishop as the official ribbon cutting date for the new era at the Guzeiji Soto Mission.