This Wednesday, half a dozen Molokai residents will gather early in the morning for a ritual they have completed every October 28 for the past 20 years. They will travel east across the island, stopping at cemeteries along the way before tossing flowers into the ocean at Kamalo Wharf. The group, the surviving members of the 1989 Molokai High girls’ volleyball team, is still tightly bound by the teammates and coaches they lost in a fatal plane crash that year.

“We are all really close,” said Bill Dudoit, who was an assistant coach that year. “Of course we still cry during the sad parts, but it’s mostly remembering them in good ways now. We share happy memories and the nice things we remember about them.”

The afternoon after clinching the Maui Interscholastic League championship 20 years ago, Dudoit and seven members of the newly-crowned Farmers flew back to Molokai. The rest of the team was scheduled to arrive that night on Aloha Island Air Flight 1712. They never made it.

Priscilla Maliu, 15 years old at the time, was celebrating the win with a few of her teammates when she got the news. 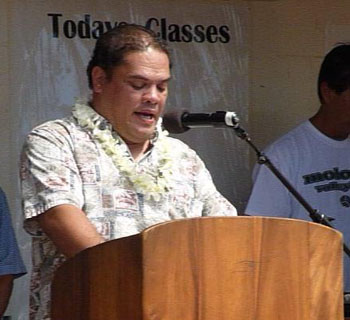 “We were having fun at the park and a bunch of friends came and told us they didn’t know where the plane was. I was kind of in shock,” she said.

The girls spent the night at the airport waiting for news that never came. The following morning they learned that the plane had crashed on the cliffs of Molokai’s northeast coast and that none of the 20 people on board survived.

“It felt like the whole island was there when he heard. It was the hardest thing I’ve ever had to go through in my life,” Dudoit said.

Among the 20 passengers were five members of the girls’ team – Leilani Ahina, Lea Dunnam, Natalie Helm, Kaipo Maihiai and Aloma Spencer. Their head coach Odetta Rapanot was also on the plane, along with Athletic Director John Ino and three members of the boys’ volleyball team – Jared Elia, Testa Ku and Jovencio Ruiz.

The Molokai community immediately came together in support of the team and the families of the victims, but plenty of tough times were still ahead.

The Game Must Go On
The conference championship gave Molokai an automatic spot in the Hawaii state tournament on Oahu. The 20-year-old Dudoit and his players were faced with the tough decision of whether or not to play in the tournament with the seven remaining members of the team.

“At first it was a really hard choice,” Dudoit said. “The girls were so down and out. Every time we went on the court, they would just start to cry. But, one day we sat down and I told them it was really their decision.”

For the girls on the team, there really was no decision to make.

“We had to, for them. It was tough but we knew that we had to go on and play for our teammates,” Maliu said.

The team arrived on Oahu and was immediately swarmed by reporters who had heard about the tragedy. They hoped that getting back onto the court and playing would provide a brief break from the pain, but there was no escaping it.

When the team walked into the sold-out gym for their first game they were greeted with a two-minute standing ovation.

“There wasn’t a dry eye in the gym,” said Barbara Helm, whose daughter died in the crash. “It was somber but we all wanted to go and be in the stands to support the girls.”

The girls played six games and didn’t win a set. It didn’t matter. For the team, just showing up was a victory.

Helm said the parents of the victims wanted the girls to play and decided that they needed to be there to support the team no matter how hard it would be.

Keeping the Memory Alive
Helm and her husband, Larry, are still regular fixtures in the Molokai High bleachers. In fact, many of the people most deeply affected by the crash are still very involved in Molokai volleyball today.

The five girls from the 1989 team that still live on Molokai play together every year in alumni tournaments and adult community leagues. Maliu recently started coaching a middle school team. Dudoit coaches the boys’ volleyball team and Matt Helm, Natalie’s brother, is now the head coach of the girls’ team.

“Giving back to the sport helps us all stay connected to those girls,” Helm said. “I would be lying if I said that wasn’t some of the motivation in coming out to coach.”

Both the boys and girls’ teams decided to dedicate their 2009 season to the memory of those that died in the crash. The girls have worn shirts with “1712” printed across their back all season to remember the flight.

The coaches, too, make sure that day is never forgotten. Helm, Dudoit and Maliu all said that they talk to their teams every year about the accident, the team and the students that were lost.

“I just want to make sure they know that part of our history and our tradition,” Helm said. “It helps them knowing what the ’89 girls went dealing with their own adversity. Mostly, though, it’s just to remind them that life is precious.”

Talks and time have healed some of the wounds for those closest to the crash, but the scars will never fade. When asked how often they think about their teammates both Dudoit and Maliu answered immediately, “Everyday.”

This weekend, at about the same time Dudoit and the surviving teammates are making their annual memorial trip, Helm and his 2009 Farmers will be back at the state tournament on Oahu to put their undefeated record on the line and fight for a championship. Helm said he already spoke to the girls about the crash this week at practice and he was sure it would come up again during the weekend.

“I think it’s a good thing to talk about,” Dudoit said. “A lot of the families of the girls were afraid that people would forget about them. They’re not forgotten.”