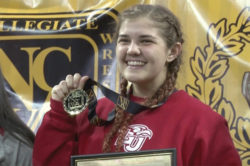 “I was very blessed to represent my school, my state, and my island, and God this weekend!” said Manley. “Wrestling has been such an amazing part of my life and I’m so thankful for my Molokai family who was cheering me on and praying for me the whole time! Love you all!”

The former 2016 Girls State Champion is the daughter of former Liberty wrestler Randy Manley (’87), who competed for Flames in the mid-1980s. Randy is the longtime Head Coach for Molokai Wrestling.