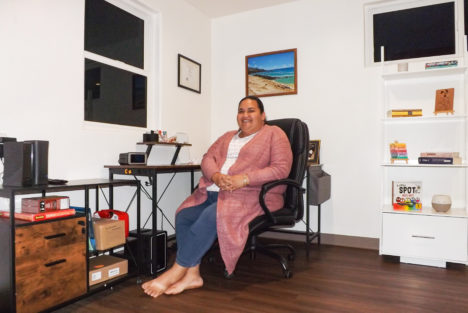 Residents have a new space to address their mental health needs thanks to Molokai’s own Keshia Adolpho.

Right off the main road in Kaunakakai behind All Things Molokai, the Na’au Healing Center is open and ready for business. Adolpho’s new office is comfortable and inviting, adorned with board games, new furniture and a TV playing Christmas music.

Born on Oahu and raised in Ho’olehua, Adolpho graduated with her master’s in social work in 2014 but wasn’t sure yet what she wanted to do with it. It was only in coming back home to Molokai that the idea of becoming a licensed clinical social worker took shape.

Adolpho explained she wanted to respond to “the need in our community.”

“It was time. I wanted to try it out,” said Adolpho in reference to launching her own practice. “You never know if your parachute is going to work until you jump.”

Na’au Healing Center gets its name from the Hawaiian word for gut. It references the idea of “healing from the inside out,” explained Adolpho.

In such a way, the new Na’au Health Center represents a “blend of the Western way and Hawaiian style.”

Mental health was an industry that actually expanded during the pandemic, due to the explosion of telehealth and remote care options which became available. In this way, strangely COVID “opened up the doors” to more awareness and possibilities for mental health care, explained Adolpho.

While more care options became possible, so too did the need for mental health support. According to the World Health Organization, prevalence of anxiety and depression rose globally 25 percent during the first year of the pandemic.

Although the demand for therapy is great, there is a distinct lack of practitioners on island. During her time at the Community Health Center, Adolpho estimated she saw between 300 and 400 patients.

Thus, she was able to recognize and address a true community need when launching the Na’au Healing Center.

While it would be easier to specialize in one field of mental health, Adolpho has decided to maintain an ability to serve all kinds of patients.

Adolpho is open to “all ages, all walks of life, all sorts of diagnosis – anxiety, depression, substance abuse, personality disorder, ADHD.”

She likewise is prepared to work with couples, families, and is even looking at group therapy.

The therapy style that Adolpho works with is called cognitive behavior therapy and motivational therapy.

“Basically, the styles are just sitting and talking,” explained Adolpho, in order to “look into what a person might be wanting to address.”

And while cultural stigmas towards therapy may be abating, Adolpho understands how challenging it can be.

“The first session is always the hardest,” said Adolpho.

Even though the mental health needs of Molokai may at times be “challenging,” Adolpho assured that “it’s getting better.”

It’s all about “having someone to talk to,” she said.