With flat water and a clear sky above, Waikiki Beachboys Canoe Club wahine paddlers placed first out of 61 crews at the 36th annual Na Wahine O Ke Kai race last Sunday morning. Paddling 42 miles across the Ka`iwi Channel from Molokai to Oahu with top teams from around the world, Waikiki Beachboys crossed the channel in 5 hours 29 minutes 12 seconds.

Alanna Bender, a paddler for Waikiki Beachboys, said her team trains in flat water and expected light trade winds during the race. She said these conditions are better than heavy winds and high surf that can cause the canoe to spin out or flip over.

“It’s definitely going to be a fight until the very end but hopefully we can do it,” she said, as she joined hundreds of fellow paddlers at Hale O Lono before the race. “A race like this, especially for women, who fought really hard for this race, is amazing.”

Bender said she comes from a family of paddlers and has been paddling for 19 years.

“This race shows that you can do it,” Bender said. “You can be strong, embrace nature, persevere through anything and keep the culture and tradition alive.” 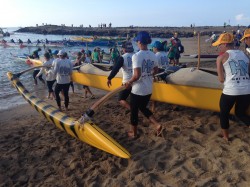 For the first time in several years, Molokai did not have its own crew competing, but two local women joined other teams to make the crossing.

Molokai paddler Coral Gonzales, who paddled this year with defending champions Team Bradley of Maui, said the race will be a good learning experience. Team Bradley did a practice run on flat water days prior, which better prepared them for the race, Gonzales said. Team Bradley placed second in Sunday’s race finishing in 5 hours 30 minutes 25 seconds.

“Paddling feels good inside and it helps motivate the younger generation to learn and get into ocean sports,” Gonzales said.

The annual race is organized by the Na Wahine O Ke Kai Association and race director Hannie Anderson. Tides and changing winds make the Ka`iwi Channel unpredictable each year Anderson said, and this year’s flat water made for a physically challenging race.

“They won’t have the assistance of any surf or wave bumps,” Anderson said. “They are going to have to paddle all the way across.” 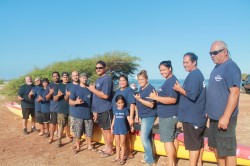 The Buchanan family and Molokai Security Services crew set up and clean up the race every year. Photo by Laura Pilz.

There’s a lot of work that goes into making the race happen.

Moku Buchanan, owner of Molokai Security Services, and his family began setting up and cleaning up the women’s and men’s races in 1980. From bringing in the stage and connecting the sound system to directing traffic and cleaning up the beach, the Buchanan `ohana works to organize this effort every year. They start planning about a year in advance, and a couple months before the race, form a staff crew for the day, Moku Buchanan said.

“We do it all for the paddlers,” he said. “These races were a huge highlight in the year for me when I was growing up. Everybody used to camp out down here and it was a really fun weekend back then.”

Moku Buchanan said the festivities have changed over the years. Nonetheless, his family’s support for aiding in donating barrels for trash, placing traffic cones along the road and collecting carpet used under the canoes before the launch, has remained steadfast over the years.

Men have been racing across the channel in the Molokai Hoe paddle race since 1952. At the time, many coaches and officials insisted women could not handle the treacherous channel, but in 1975 two Oahu women’s crews — Onipa`a and Healani — proved skeptics wrong after competing in an unofficial competition, according to Anderson. Four years later, 17 wahine crews competed in the first official Na Wahine race. Hannie Anderson and the late Leinani Faria, another colleague who shared the dream, officiated the first crossing, she said.

Na Wahine O Ke Kai attracts veteran and novice paddlers across the state and around the world to become part of the legacy. Although they are competing, the paddlers say they share a passion for the sport that keeps it alive.

“This is how our ancestors traveled from canoe and it’s natural to be on the ocean and paddling to another island,” Kalipi said. “It’s awesome and we cannot let it disappear. We have to remind people that it’s more than competition but a part of our culture.”