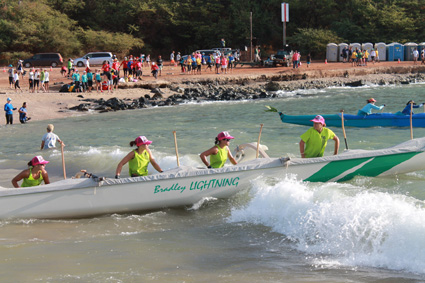 With large overhead swells crashing right into Hale O Lono Harbor Sunday morning, just getting out to the starting line became a treacherous feat for paddlers competing in the 34th annual Na Wahine O Ke Kai canoe race. The surf was so big that 10 canoes were swamped, with a few vessels flipping completely, just exiting the harbor before the race started. Fortunately for Molokai’s only competing team, the wahine of Team Boomski of Wa`akapaemua Canoe Club navigated out past the breakers and made it swiftly to the starting line. They went on to finish the race, which spans about 40 miles, with a time of 7:02:46.

The Molokai women placed fourteenth out of the 71 teams that participated in this year’s race across the Ka`iwi Channel from Molokai to Oahu. First place went to Team Bradley from Maui, with a time of 6:14:47, followed by Waikiki Beach Boys’ first team with a time of 6:17:13 and Hui Nalu Yellow team with 6:29:14, both from Oahu. 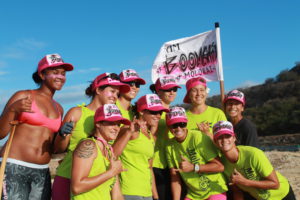 Team Boomski pose for a quick photo before the race. Photo by Laura Pilz.

Of the 10 canoes that were caught by breaking waves, nine went on to start the race. One canoe was damaged and towed back to shore by event boats, and a 30-year-old paddler from Kailua Canoe Club had to be transported by ambulance to Molokai General Hospital after suffering possible injuries to her shoulder and ribs.

Molokai team captain and steersman Tiana Miguel said before the start of the race that she had never paddled through such large swells, but that if they made it to the starting line, the rest would be manageable.

“I just hope we have no regrets when we finish,” said Miguel, as hundreds of women from around the world gathered before the race. “I want us all to feel like we left it all in the water and we gave all that we could.”

Though the team did not place in Na Wahine O Ke Kai, their last race for this season, they have had their fair share of achievements this year. They placed second in both the Queen Ka`ahumanu Maliko Race and the Dutchy Kino Memorial Classic. At the Queen Lili`uokalani Race in Kona earlier this month, they came in tenth out of 130 teams.

The men’s team from Wa`akapaemua will also compete across the Ka`iwi Channel in the 59th annual Molokai Hoe canoe race on Oct. 7.