Local farm brings lessons of the `aina to life 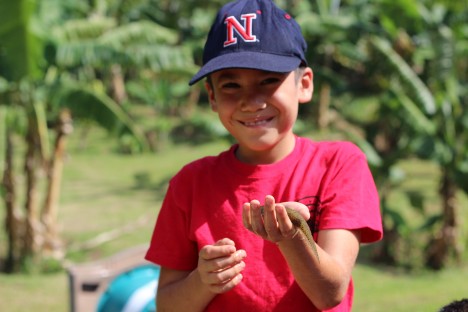 A handful of Kilohana Elementary school students stared down uncertainly into the thick, gloopy mud of the lo`i kalo below them.

Kilohana educational assistant Teon Simmons was trying to coax them into the lo`i, where three of their schoolmates were already wading and pulling weeds from the ankle deep muck. Wedged in the middle of the patch, farm owner Jo-Ann Simms was teaching the students how to gently swing long bunches of weeds to shake excess mud back into the lo`i.

Jo-Ann understood the hesitance to dive into the dirty, tedious task, a job she’s been doing since she was a kid.

“We used to hide in the patch ‘cause we were tired of pulling weeds,” she remembered.

However, on this farm in the lush Waialua Valley on Molokai’s east end, all learning is hands-on. Jo-Ann and her husband Howard have been living on this four-acre property for over 30 years, and Jo-Ann’s family has lived here even longer. During that time, they’ve taught hundreds of curious students, tourists and residents what it means to coax the natural riches from the land with knowledge and respect. 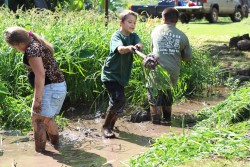 Kilohana students and siblings Talamoni, Keoki and Aumoeualogo Togia help weed the lo`i kalo during a visit to the Simms’ farm. Photo by Colleen Uechi.

“Culture is living within us, so we need to pass it on before it’s lost,” said Jo-Ann. “… In my older years now, I want to give back to the children. I want to be able to be a resource and share with them what I know.”

The Simms’ farm is teeming with teachable moments. On Jan. 16 Kilohana brought around 40 students and faculty to the farm. The theme during the school’s visit was symbiosis, emphasizing the mutually beneficial relationship between animal and plant life on the farm. Howard pointed to a pond brimming with tilapia, dug just above the lo`i kalo and a large, water-filled tub of snails nearby.

“The water from the tilapia is nutrition for the taro,” he said. “The snails eat taro and ong choy. It’s kind of a cycle.”

Aside from tilapia and snails, the Simms also raise pigs, chickens, pigeons, rabbits and goats, all of whom were part of Kilohana’s lessons. The students cradled animals while learning that rabbits are usually pregnant for about a month, goats for four and a half months and pigeons for only 18 days. Howard said they’ve also owned cattle, geese, turkeys and ducks throughout the years, many of them left as gifts on the Simms’ doorsteps.

“We do a lot of it for the grandkids,” said Howard. “Hands-on learning is amazing.”

The students also learned to identify the fruits, vegetables and herbs on the farm. After volunteer cultural educator Penny Martin reviewed the assorted samples of leaves taped and labeled on an old plastic table, the students ran off on a scavenger hunt throughout the farm to find the plants.

“My favorite part was when we did the treasure hunt,” said fourth grader Cassidy Duquette. “It was good to learn about new plants. [I learned] that you can eat okra whole.”

On an island as agriculturally focused on Molokai, said Howard, these are things kids need to know. Jo-Ann and Howard themselves grew up with agricultural backgrounds. Howard was born and raised in Kentucky, where he and his family were completely self-sufficient.  Howard stripped tobacco plants with his family from 6 p.m. to midnight each day. They made their own soap, grew their own potatoes and meat sources and purchased very little outside of the farm. 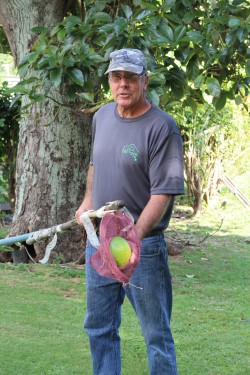 Jo-Ann was born and raised on Molokai, growing up on the farm where she and Howard now live. Back then, the land was dedicated mainly to kalo, but the family also grew mango and ulu trees, sweet potatoes, pumpkins and squash on a property that’s been rich with resources for hundreds of years.

“Anywhere there was an open space for growing it was planted for family use, sharing or the animals,” said Jo-Ann.

Jo-Ann is comfortable with all aspects of rural life. Howard said she’s not afraid to climb a tree with a chainsaw and recalled how she once chased down and tackled a deer on their property with the help of a dog.

On their farm, they are about 60 percent self-sufficient, estimated Howard. Nearly everything on the farm serves multiple purposes. Rabbits are for eating, but their manure is also for fertilizing. Lilikoi is good as a fresh fruit, in juice or in butter, and the Simms also create vinegar from it to separate curds and whey when they make cheese.

Like they often do with visitors, the Simms treated Kilohana School to large icy pitchers of lilikoi juice, fried tilapia, freshly baked ulu bread and malassadas made with home-pounded poi. With the kids refueled on homegrown grub, Jo-Ann worked with some of the students in the lo`i while Howard and Kilohana teachers took the kids to clean banana plants.

“We learned that you have to cut [the plant] into separate parts,” said fourth grader Daylan Hoffman. “You wash it really good and make sure you don’t bruise it. Then you let it dry and it should be ready.”

Simmons, a special education E.A. at Kilohana School, feels it’s important to connect kids to the `aina early on. Some of Kilohana’s other field trips include visits to fishponds and the forest. 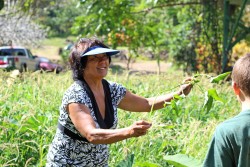 Jo-Ann Simms uses weeding in the lo`i kalo as a teaching moment. Photo by Colleen Uechi.

“It’s good for them to get out of the classroom and get outdoors, to see what Hawaii has to offer,” said Simmons, who as a kid used to visit the same property to swim in the pond, pre-tilapia. “Just to have future generations know these things is really valuable.”

The Simms’ seven grandchildren are soaking up knowledge as well. If the Simms need a certain vegetable or herb, they’ll ask one of the kids to go and pick it to help them learn the types of plants. Eight-year-old Tiara Simms has been accompanying her grandparents for farm chores “since before she could walk and talk,” said Howard, beaming. Tiara, who could make her grandparents eggs and coffee at 11 months of age, said she and her grandmother now cook banana bread, brownies, cakes, pudding, lumpia and more, using ingredients from the farm.

On the farm, getting dirty is part of learning.