If you’ve been collecting junk cars, appliances or scrap metal in your yard, now is the time to say goodbye to such lawn ornaments. A metals recycling collection event on Molokai, put on by the County of Maui, is going on right now until Sept. 8. The event allows residents to safely trash their scrap metal free of charge. 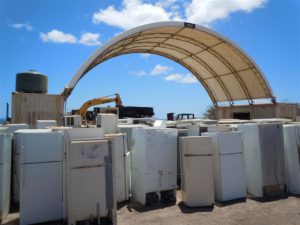 Fridges awaiting processing at the Molokai Metals Recycling Facility at the landfill. Photo by Catherine Cluett

The current metals recycling program, which started three years ago, opens up once to three times per year. Located at the Molokai-Naiwa Landfill on Maunaloa Highway, the event is operated by Maui-based company Kitagawa’s Towing & Metals Recycling, which is contracted by the county to process the metals.

The last such collection event was in December 2011, said Patience Gaia, administrator of Abandoned Vehicles and Metals within the county Division of Environmental Management and Solid Waste. Since then, the Molokai facility underwent construction and expansion as required by the Department of Health. Now, an extended concrete slab installed to prevent fluids from seeping into ground can also accommodate additional storage and processing of metals, said Gaia.

The Molokai Metals Recycling Facility, designed to be an interim site, was closed in 2009 when it reached capacity. Gaia said the county wanted to continue running a more on-going metals recycling program, but found that its use slowed to a trickle and the operation was not cost effective. So they “resorted to a collection event” in 2010, said Gaia. 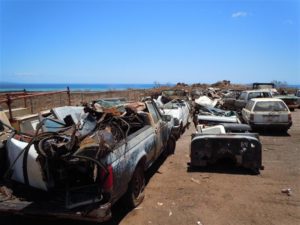 Junk cars wait to be crushed before being transported to Oahu for recycling. Photo by Catherine Cluett

The collection events have proved much more successful. In the program’s first year in 2010, over 2,000 tons of material — or more than 4 million pounds — were collected in two events, including 1100 cars, according to Gaia. Last year, that number decreased to 550 tons, or over 1 million pounds, and included 320 vehicles and 460 appliances.

So far during the current event, which has been open since July 31, Molokai resident and Kitagawa’s employee Lynn (who preferred not to give her last name) said they have seen a steady stream of about 50 residents per day bringing in their metals.

Gaia said the county hopes to hold two more events before next July– one in January and one in May.

How it Works
The metals recycling service is free of charge to residents, though businesses and agencies do have to pay a fee. Just separate metals from other waste and recyclables, stop at the landfill scalehouse and drive straight ahead to the metals facility with the arched roof.

To scrap a car, truck or motorcycle, a Vehicle Acceptance form must be filled out by the owner and submitted to facility staff for each vehicle. These forms can be found at the landfill, the metals facility, at Molokai Treasures in the Meyers Building in Kaunakakai and online.

For those who need assistance with metals transportation, there is help available. Maui-based nonprofit Community Work Day Program is coordinating local volunteers to assist and elderly and disabled during the collection period. You must call ahead to schedule this service — (808) 877-2524 or local liaison at Molokai Treasures at 658-0919.

Once metals arrive at the Molokai facility, Kitagawa’s employees process the materials. They remove tires, batteries and fluids from vehicles. A local refrigeration expert removes Freon, a chemical found in older cooling appliances, from refrigerators, said Lynn. Then all metals are crushed and baled into giant two-ton rectangles and loaded onto “racks” — which hold about 15 bales each. 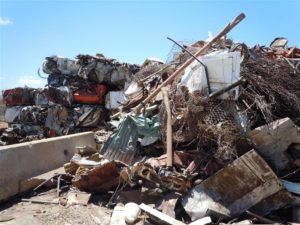 Scrap metal (foreground) is crushed into bails (background) for transport to Oahu. Photo by Catherine Cluett

The racks are shipped off to Oahu almost weekly, according to Gaia, where the materials are further processed. Tires are incinerated to generate electricity, batteries are recycled and reused, and the metals are shredded, where they may be sent to China, Australia or Turkey, some of the world’s major metal processing plants, said Gaia.

Why Recycle Metal?
While it can be easier to just let your junk car sit in your yard, Gaia said there are some serious environmental and safety consequences.

“Batteries and fluids will gradually deteriorate and the materials will seep into land,” she said. This will not only contaminate the soil for future agriculture or other uses, but can also seep into the ground water.

“It only takes a small amount of motor oil to contaminate water,” reminded Gaia.

In addition, old cars and metal appliances left sitting outside can become a haven for pests like mice and rats, which nest in those spaces and can spread disease.

“Tires are notorious for spreading dengue fever through mosquitoes [by holding water where mosquitoes breed],” she said. Rusty metal can also be a safety hazard for children playing in the yard, she added.

There are also legal ramifications of leaving abandoned vehicles on county or state property (as opposed to junk vehicles on private land), said Gaia. Under the Abandoned Vehicles Law, the county has a legal obligation to remove abandoned vehicles, and the registered owner is charged disposal fees of $500 to $800, according to Gaia.

“We’re literally holding off on authorizing those tows on Molokai,” said Gaia. “We wanted to make sure that residents have had plenty opportunity to remove it themselves [free of charge].”

She urges residents not to leave their cars along roadways, parks, public parking lots or by the water — and if you already have, remove them yourself during the metals recycling event.