Mother Marianne Soon to Be ‘Saint’ 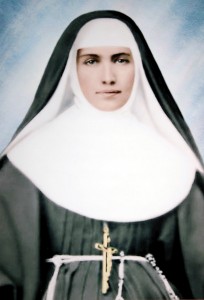 This month marks long-awaited confirmation of what many Molokai residents and Catholics around the world already knew — Mother Marianne Cope will be officially declared a saint. Mother Marianne, who served Hansen’s disease patients in Kalaupapa for 30 years alongside St. Damien at the end of his life, will be canonized by the Pope in Rome on Oct. 21. Marianne will become the second saint to call Molokai home.

About 400 Catholics from Hawaii, including from Molokai four parishioners, Father William Petrie and a group of Kalaupapa patient residents, will make the journey to Italy to witness the canonization in person. The group, led by Honolulu Bishop Larry Silva, will also include a number of sisters of the Franciscan order, based in Syracuse, New York, of which Mother Marianne was a member.

The ceremony will take place at the Vatican in Rome at 10 a.m. — or 10 p.m. Hawaii time. Five others will also be canonized the same date as Mother Marianne, including Kateri Tekakwitha, a Mohawk Indian from New York state.

“For me, it’s reinforcing the sacredness of the island of Molokai,” said Petrie of Marianne’s canonization, adding its proof of the “work and commitment of two people [Marianne and Damien] who had heroic love.”

For Molokai parishioner Mary Igarta who’s making the trip to witness the canonization, “being a part of [the ceremony] is incredible.” Igarta was also present in Rome for St. Damien’s canonization in 2009. She calls Damien her personal hero, “so Mother Marianne is very special because she worked side by side with him.”

“To be there and know that there are two saints from our small little island… how proud I am to be a part of that,” said Igarta.

Many Hawaii residents are also making the trip to Rome a spiritual pilgrimage that will include stops both in Marianne’s hometowns in New York state, as well as sacred destinations in Europe before ending in Rome, according to Petrie. Igarta said she is doing an extended pilgrimage of the Holy Land, following in Jesus’ footsteps through Europe and Jerusalem. She said while fewer Molokai parishioners are making the trip to Rome for Mother Marianne’s canonization than they did for Damien’s three years ago because of the poor economy, she’s making the journey worth her money by including her “life-long dream” of the Holy Lands pilgrimage.

Molokai Celebrations
While a handful of Molokai residents represent the island in Rome, the majority will remain here and watch the canonization through a live stream on the Internet from 10 p.m. to midnight on Oct. 21, said Petrie. A special Mass will take place at St. Sophia church that Sunday, held in Petrie’s absence by Father Michael Kelly, priest in residence, who came to the island in July. A celebratory Mass will also be held in Kalaupapa.

Another celebration will take place on Molokai Nov. 2, when a relic — a bone or body fragment used for veneration — of the soon-to-be-saint will visit the island on the first stop in its tour of Hawaii. Mother Marianne’s relic will be accompanied by Silva and a group of fellow bishops and Franciscan sisters.

It will be transported to several Catholic sites around Molokai, including Our Lady of Seven Sorrows, St. Joseph and St. Sophia churches, according to Petrie. A mass will be held in Kaunakakai in the evening, followed by a period of prayer and personal veneration with the relic until midnight.

At 6 a.m. Nov. 3, the relic will begin the trek to Kalaupapa, carried down the pali trail by four female students from the Franciscan school on Oahu and accompanied by four local Molokai parishioners. Dignitaries will fly down to the settlement and meet the saint’s relic for Mass and veneration in the home of Mother Marianne.

This is the second time a relic of Marianne has visited Molokai. Her relic came to the island in May of last year, which corresponded to the six-year anniversary of her being declared Blessed. She gained beatification in 2005, which is the third step of four in the canonization process.

The Life of the Saint
Marianne Cope was born in Germany in 1938, and her family immigrated to New York shortly afterward. They were Catholics, and the youth Cope attended a parish school. She later became a sister in the Franciscan order.

Mother Marianne came to Hawaii in 1883 to establish nursing care for patients of Hansen’s disease. She worked in Kalaupapa until she died there of natural causes in 1918. She dedicated her life to the service of those with Hansen’s disease exiled to the peninsula, “day in day out, being a mother… an aunty” to them, according to Petrie. Photos of the girls under her care show them dressed in beautiful clothes of the latest fashions which she had sewed herself, proof that her dedication went above and beyond just the physical health of the patients.

“She had something that others wanted to imitate,” said Petrie. “What her life did was inspire many others.”

Marianne’s road to sainthood officially began in 2004, when Pope John Paul II named her “Venerable.” Two miracles must be attributed to someone and confirmed in order to be considered for sainthood by the Catholic Church. In 2005, Marianne was beatified, or declared “Blessed,” after a first miracle was confirmed as due to her intercession. A second miracle — the medically inexplicable recovery of a woman who prayed to her — was confirmed last year. Shortly thereafter, Pope Benedict XVI announced her coming canonization.