Mother by Day, Artist by Night 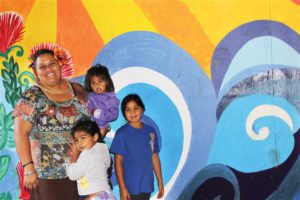 Tucked between towering cabinets and buckets of paint-dye in her garage-studio, Molokai artist Kala`e Tangonan is home.  Standing over an old table, she paints milky wax designs over a blank silk scarf – it is the humble beginnings of what will become a color-drenched masterpiece.  The tip of her brush dips into hot wax and then glides freely over the gauzy material, hardening into the free-hand patterns that will appear after the dying process.  She peels the scarf from the table and dunks it into a bucket of violet dye – a technique called batik.  The scarf is hung on a backyard clothesline, all the while Kala`e discusses the challenges of being both an artist and a mother.

“Sometimes I come out here at two in the morning after the kids are asleep,” said the mother of seven.  “It’s the only time I can get away.”

Odds are you have already come across Tangonan’s art, whether you’ve browsed through one of her batik scarves at the Saturday market or seen painted murals beautifying otherwise nondescript walls around the island. Even Molokai landmarks like the old Midnite Inn and the hot-bread alleyway have received her touch.

Recently however, Tangonan’s art has broken free of its rural origins. Those enjoying a getaway at Disney’s Aulani Resort and Spa on Oahu will also catch a glimpse of her striking designs — her art is currently being featured at the new hotel.  Her name was recommended for the display by a cultural advisor who had been familiar with her work, and Tangonan had only four months to produce two separate installments– one double-paneled piece of Hawaii’s state fish, the humuhumunukunukuapua`a, and also a three-paneled piece of a mauka-themed ho`okupu (offering).

Despite these accomplishments, Tangonan’s passions still lie at home on Molokai.  As a native, Tangonan’s ties to the land run deep and she strives to incorporate mo`olelo from friends and family into her art.

“I try to relate what I paint to a person or place,” said Tangonan.

When she started noticing vulgar graffiti drawn on bathroom walls at Pala`au State Park, she wanted to replace them with something beautiful instead.  In December of last year, she took the initiative and hosted a “painting party,” in which anyone – young and old, experienced or inexperienced – could help paint the mural.  She usually receives paint donations among other art supplies from hardware stores or neighbors who have extra left over from painting their houses, she said.  Today, the mural is complete with bold colors used to represent the sun rising over the oceans, according to Tangonan.  At the restrooms up the road, Tangonan and volunteers painted the sun setting using cooler colors, with the caption: “O ka pono ke hana ia a iho mai nalani” (“Blessings come to those who persist on doing good”).

“When I was growing up, there was no real outlet for art,” she said.  “I did what I could in high school, and then went to Hilo.”  Tangonan graduated from the University of Hawaii, Hilo in 2004 with a B.A. in arts. She returned to Molokai in 2006.

Because art resources were limited on Molokai when Tangonan was young, she emphasizes the importance of making art available for the kids.  She commends the recently opened Molokai Arts Center at Coffees of Hawaii.

“The Arts Center is really good because it is important to make children more aware in all types of art,” she said.

These days, you may find Tangonan selling her batik silk scarves and wallets at local events like the Ho`omau fundraiser for Punana Leo, or doing hair and makeup backstage for her daughters’ school production.  If you’re really lucky, you may catch her in her element –making art from her garage studio on the occasional late nights when she finally gets a moment to herself.

“Art is everywhere,” she said.  “I just know it rules my life and I do art all the time.”

2 Responses to “Mother by Day, Artist by Night”