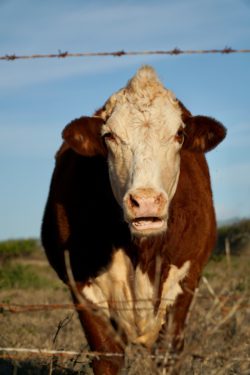 Recent detections of bovine tuberculosis (bTB) on Molokai has prompted the state Dept. of Agriculture to issue an immediate, island-wide quarantine order restricting the movement of all ungulate animals except horses to prevent further spread of the disease. Effective last Friday, the length of the quarantine order will depend on the success of eradication or control of bTB on the island, the HDOA said. The department stated additional detections of bTB in central and the west end of Molokai in the past few months, following more cases over the past year.

Between June 2021 and March 2022, the HDOA issued quarantine orders on six infected herds in the areas of central and west Molokai. Friday’s order expands the quarantine and requires approval and a permit from the State Veterinarian’s office before the movement of any live ungulates, other than horses from premises on the entire island, according to the HDOA. This includes cattle, sheep, goats, swine and deer. This approval and permit are also required for ungulates, other than horses, transported into Molokai.

“The department’s Animal Disease Control Branch has been working closely with the U.S. Department of Agriculture to prevent the further spread of bovine tuberculosis on Molokai,” said Phyllis Shimabukuro-Geiser, chairperson of the Hawaii Board of Agriculture. “However, with recent detections, this quarantine is necessary to help protect uninfected herds on Molokai and also livestock across the state.”

Bovine tuberculosis is caused by the bacterium, Mycobacterium bovis (M. bovis), and cattle are the primary host. Other species of animals may also become infected. Although M. bovis can also infect humans, the transmission to humans occurs mainly in countries with high infection rates of M. bovis and poor disease-control programs.

HDOA will be holding an informational meeting for livestock producers, hunters and other interested individuals on Monday, April 18 at Lanikeha in Ho’olehua at 6 p.m. The department will also be providing Zoom information to attend virtually.

Bovine tuberculosis has been known to occur on Molokai since at least the 1940s. In 1985, all Molokai cattle were culled in an effort to eradicate bTB, with more than 9,000 cattle removed from the island. Following the depopulation, Hawaii received “bovine tuberculosis free” status from USDA in 1993, which allowed the interstate movement with no restrictions for bTB.

In 1997, that status was suspended when a 10-year-old cow on the East End of Molokai was found infected with bTB.  The entire herd was culled and after additional area and contact herd testing, the state regained its bovine tuberculosis free status the following year.

In June 2021, a new outbreak of bTB was detected in a small beef herd in central Molokai. Testing of a neighboring beef cattle herd found that herd was also infected. The two infected herds were completely depopulated and ranch facilities were cleaned and disinfected. The quarantine orders placed on those herds were subsequently rescinded on Dec. 22, 2021, according to the HDOA.

In November 2021, a second detection occurred during routine monitoring when four pigs from a farm in west Molokai were slaughtered. The originating farm also contained cattle and sheep. Approximately half of the swine herd on this premises and a single cow were found to be infected. The premises was placed under quarantine and depopulated. The source of the infection in the second outbreak continues to be investigated. Swine traced from the original herd to other pig farms in central Molokai are also quarantined and depopulation is being planned or ongoing.

More recently, between January and March of this year, more infected herds were found in both the central and west end regions of the island.

The HDOA said wildlife sampling with the aid of local hunters is beginning, to determine if wildlife are infected outside of the east end of Molokai where infection had historically been confined among feral animals.

“It is presumed that the severe ongoing drought on Molokai resulted in not only weakened immune systems of animals but also closer association between wildlife and livestock, likely resulting in these outbreaks,” stated the HDOA.