Wednesday, May 14th, 2014 By Laura Pilz and Catherine Cluett 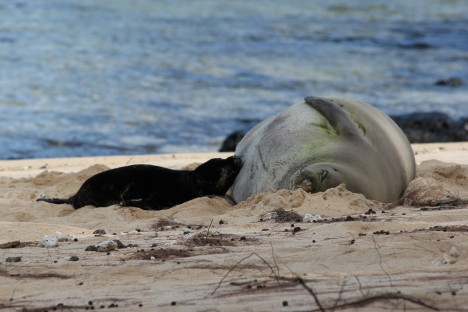 By Laura Pilz and Catherine Cluett

Even though youth of the human species aren’t permitted in Kalaupapa, babies of the Hawaiian Monk Seal persuasion are welcomed.  The peninsula has become one of the most popular spots for endangered monk seal births, with two so far this year.

According to Diane Pike, Molokai Response Coordinator for the Monk Seal Foundation, almost all of the monk seal births on Molokai occur in Kalaupapa. “Last year, we had 10 pups,” said Pike, “and all of them were born in Kalaupapa.”

Through tracking efforts, scientists have found that those females who come to give birth in Kalaupapa are not necessarily Molokai seals. Some travel a great distance to the remote Kalaupapa peninsula to give birth in a safe and protected location.

“How they find Kalaupapa, we don’t know,” admitted Pike. She explained that monk seals are constantly moving and travelling between islands. A male monk seal born a few years ago on the west end of Molokai is now living on Oahu, she said.

Most monk seals are born between March and June. The first pup of the year for Kalaupapa was born on March 20. The second birth occurred on March 24, but this pup died three days later on March 27.

According to Eric Brown, Marine Ecologist for the National Park Service in Kalaupapa, this is the second pup that the mother, tagged as RV06/07, has lost in the first week of its life. He noted that it is rare for a mother to lose more than one pup.

Necropsy — or biopsy for animals — results from National Oceanic and Atmospheric Administration (MOAA) Veterinarian Michelle Barbieri revealed “hemorrhaging in the muscle and connective tissue overlying the skull.” Although not conclusive, that indicates the cause of death was most likely acute trauma, according to Brown. The cause of trauma is difficult to diagnose, but Barbieri noted that an aggressive male was known to have been in the area the previous day and suggested harassment by this seal as a possible cause.

“The [other] surviving pup is doing well and is scheduled to wean within the weak,” he said .

Earlier this month, another monk seal birthday was celebrated. Ho`ailona, also known as KP2, a Hawaiian monk seal that lived on Molokai in 2008 and became very friendly with humans around Kaunakakai Wharf, turned 6 on May 1.

Abandoned by his mother after birth, Ho`ailona was raised by scientists and released into the wild with the hope that he would acclimate to the life of a “normal” seal. But he loved hanging around people, and as he got older, researchers also found that he had developed blindness in both eyes and could not adapt well to living in the wild. So in 2009, he was transported to University of California, Santa Cruz, where researchers monitored his growth and behavior, learning a lot about the species. In 2011, Ho`ailona moved back home to Hawaii, and now lives at the Waikiki Aquarium, there the public can visit him.

Scientists believe that research, observation and recovery actions are necessary to both better understand this endangered species and ensure it doesn’t reach extinction. After several years of discussion, public hearings and community input, the final version of the Programmatic Environmental Impact Statement (PEIS) for Hawaiian Monk Seal Recovery Action is now completed. The document outlines several alternatives for varying degrees of human involvement in monk seal recovery. The PEIS provides decision-makers and the public with an evaluation of the environmental, social, and economic effects of funding, permitting, and conducting research and enhancement activities identified in the Hawaiian Monk Seal Recovery Plan with the goal of conserving and recovering the species.

The preferred alternative identified by NOAA involves limited translocation, or a type of recovery action that involves moving monk seals from one location to another to increase seal survival and minimize interactions with humans. The Preferred Alternative 3 in the Final PEIS includes several types of monk seal translocations, including moving seals within the Northwestern Hawaiian Islands (NWHI), within the main Hawaiian Islands (MHI), and from the MHI to the NWHI. However, it does does not include anytranslocation option that would involve taking seals born in the NWHI andreleasing them in the MHI.

Copies of the final PEIS are available at the Molokai Public Library or online at nmfs.noaa.gov/pr/permits/eis/hawaiianmonkseal.htm.