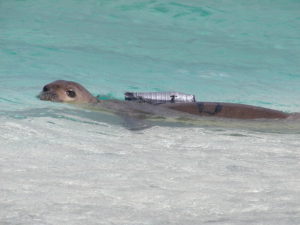 In order to bring more tangible data to ongoing efforts to better understand Hawaiian monk seals, the National Oceanic and Atmospheric Administration (NOAA) has developed a research project that will attach Crittercams, or small video cameras, to the backs of the seals. Video footage would allow not only scientists to gather important data, but would also help community members better understand the seals’ diet, behavior and potential impacts in the main Hawaiian Islands.

There are currently approximately 200 seals living in the main Hawaiian Islands. Their presence has created some controversy and conflict with divers and fisherman near shore, who believe the seals are competing with them for fish. The goal of the Ho`ike a Maka Project –as it has been called – is simply to “answer questions and ground discussions with legible data,” said Dr. Charles Littnan, lead scientist for NOAA’s Hawaiian Monk Seal Research Program. He visited Molokai last week to share the project with residents.

“If a picture is worth a thousand words, a video is worth a million,” said Littnan. “It is something that anyone can easily grasp and understand, you just need to watch the video to see what is going on.”

The project will span a course of roughly three years, with six trips to Molokai. Each Crittercam, provided by National Geographic, records six to eight hours of video footage, and takes at least a few days to retrieve off each seal, using a tracking device. By the end of the project, scientists expect to put out at least 20 cameras around the state. After each camera is retrieved, a community meeting will be hosted so that scientists and community members alike will be sifting through the same raw, unedited footage, said Littnan.

In addition to collecting important data on monk seals, the other main goal of the project is to foster a transparent and inclusive dialogue with the community, according to Littnan.

NOAA hopes to accomplish this by involving residents in all three phases of the project –development, fieldwork and video review. The talk story session held last Monday at the Mitchell Pauole Center was meant to gather feedback from the community as part of the “project development” phase. Littnan and his team will continue travelling between Molokai, Oahu and Kauai, the three islands where monk seal populations are highest.

The first trip to deploy cameras will be to Molokai at the end of August. The team will be made up of NOAA, National Geographic, community members and a researcher from Duke University. Littnan said he hopes to also involve high school students in the fieldwork and video analysis.

Only about 1,100 of the endangered Hawaiian monk seals are alive today, and most of them live in the Northwestern Hawaiian Island chain. But the population there is declining, due in part to a high fatality rate of pups. Crittercams have already been used on some individuals in the Northwestern islands, and scientists hope the Ho`ike a Maka Project will continue the effort to better understand the species.