Money may not be everything, but around county budget season, it becomes pretty important. Mayor Alan Arakawa presented county councilmembers with his proposed $622.6 million Fiscal Year 2015 budget last month, and since then, the council has been traveling to various districts gathering public input.

On Molokai, the three-hour meeting held two weeks ago garnered a lively turnout and a full slate of testimony.

“We’re here to listen to you as to what your needs are,” said Molokai councilmember Stacy Crivello.

This year’s proposed budget is a $63.3 million increase — 11.3 percent — from last fiscal year’s financial plan adopted by the council. Of the county’s eight districts, Molokai is slated for 6.8 percent of the funding, or $10,200,000. The island is scheduled for a variety of capital improvement projects, including $7.5 million for construction of a new Public Works Baseyard.

At the end of this month, councilmembers will begin putting together their own version of the county budget after hearing input from each district, according to Kit Zulueta, communication director for the office of council services.  By June 10, councilmembers must pass a balanced budget and obtain the mayor’s signature, or else the mayor’s proposed budget will go into effect, she said.

“They have a really tough job ahead of them,” said Zulueta.

On Molokai, six councilmembers listened to testimony and offered occasional words of feedback or support.

“It’s so nice to come to this rural community and get back in touch,” said Councilmember and budget committee chair Mike White.

Supporters of the Kalaupapa community asked for the council’s assistance in making the Kalaupapa Memorial project a reality to honor the 8,000 Hansen’s disease patients who died on the peninsula. Most of those buried there rest in unmarked graves. Ka Ohana O Kalaupapa, a group of patients, families and supporters, have been going through a lengthy permitting, fundraising and planning process.

“We have waited so long for the memorial,” wrote Kalaupapa patient resident Boogie Kahilihiwa in a statement read by a friend. “We would like to dedicate the memorial while there is still a living community. We are down to 16 living residents who were sent to Kalaupapa. When you see all the names on the memorial, it will be like everyone is standing right in front of you. It will bring tears to my eyes.”

“I think it’s really important,” he said. “It gives people a way to reconnect [with their `ohana in Kalaupapa.] We’re here to ask you to kokua.”

Zulueta said later that the county also received testimony in support of the memorial project at their meeting in Kihei, and at Crivello’s request, she will be working to help publicize the effort.

Molokai firefighters rallied to request funds for additional staffing for the east end Puko`o Fire Station, as well as a new fire truck for that station. Currently manned by only two fire personnel at a time, providing a full staff for Puko`o would increase the safety of both the firefighters and the community, said fire department representatives. One testifier called it the only station in the county that doesn’t have a full staff.

“As a second generation firefighter on Molokai, I’ve seen how much our firefighters can do with limited resources,” said Captain Henry Lindo. “[But] what happens on the east end is… [they] have to make a captain’s choices in addition to being a firefighter… You can’t put a price tag on people’s lives.”

As in previous years, the Maui Economic Opportunity (MEO) bus service on Molokai was widely supported, and residents asked for its continued funding.

Jennifer Carver, a blind resident, said she uses the bus for shopping and appointments.

“[Thanks to the MEO bus] people with disabilities can continue to have an independent life,” she said.

“At Kilohana School, the MEO bus takes maybe 25 students to and from school every day,” said Charlotte Seales. “Without it, enrollment would be down.”

“MEO helps us with rent assistance,” said one resident. “If they weren’t here, we’d still be homeless.”

Darlynne Mollena of the Molokai Youth Center called her program “the only center on Molokai that provides… a home away from home for our youth.”

In requesting the county’s continued funding, she said the Youth Center gives up to 130 kids daily a nurturing place to go after school. She was supported by a group of the center’s young attendees, who read their own testimony. One elementary student said “anytime when I’m feeling sad, lonely or even made [I can talk to staff.]”

Three Molokai High students — Sarah and Lily Jenkins and Erik Svetin — all spoke in support of the Maui Economic Development Board’s (MEDB) funding of science, technology, engineering and math (STEM) programs on Molokai. All three students said they intend to pursue college degrees and careers in these fields, thanks to MEDB’s continued financial support to expose Molokai youth to activities like robotics, science fairs and other opportunities.

“We work hard to keep our shelter open for women and children,” said advocate Lynda Dudoit. “I stand before you and ask for your continued support and I pray you feel what we feel.”

She said while most people work to keep their jobs, advocates at Hale Ho`omalu work to lose their jobs, as that would be an end to domestic violence on Molokai.

“They gave me a place to go when I had nowhere else to go,” said one survivor and supporter of the shelter. “Without it, I wouldn’t be here today.”

Without the county’s funding of the Molokai Occupational Center (MOC), employees with disabilities testified that they wouldn’t have a job.

MOC has 36 staff, 16 of whom have disabilities, according to Executive Director Tania Joao.

“They are proud of their work… it provides them with opportunities,” she said, surrounded by some employees who came to stand in support.

Another frequently-mentioned topic was a proposed increase in the cost of new water meters in Maui County. The issue received much testimony in opposition.

“I don’t know where I’m going to find $12,000 [to install a new water meter],” said one Molokai resident trying to build a home.

Others supported a possible exemption from the rising water meter costs for economically challenged communities like Molokai that is being proposed by some councilmembers.

“For young families to be able to build a home and stay here is important,” said resident Cheryl Corbiell, “and water meter costs [account for a larger percentage of construction expenses].” 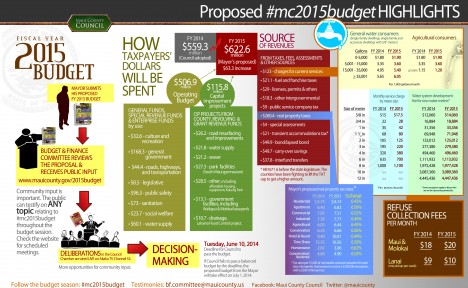