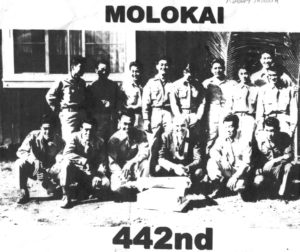 The men pictured above served this country with integrity and honor and were part of most decorated Army unit in World War II. The young Molokai Japanese Americans worked for CPC (California Packing Corporation) pineapple plantation in Kualapu`u and family businesses in Kaunakakai.

After the bombing of Pearl Harbor they joined the Army. Being of Japanese ancestry, they had to overcome the stigma of racism and internment. While fighting with the famous go-for-broke 442 Battalion in Europe, they helped save France and Italy from the Hitler German occupation, rescued a lost Texas Army company that was surrounded by the enemy, and rescued 12,000 Jews from Dochaw prison camp.

After the war, many came back to Molokai to work, bought property and opened businesses. Albert (Art) Kikukawa was owner of the famous Midnight Inn restaurant east of Friendly Market; Big Daddy’s was Kazu Araki’s store; Donald Shimzu and Tonti Seichi Sakaida worked for the pineapple plantation. These names are familiar with Molokai’s old timers — the Takatas, Tamuras, Tengans, Okimotos. Most of these war heroes have died. Robert Takeo was killed in action. Many of their ohana live on Molokai.

Molokai is proud of these veterans and their families. They served and fought for your freedom. There are other Molokai residents who served with the 442 not pictured. Their legacy will always be remembered in the new Molokai Veteran Center Museum. This picture was gifted to the Molokai Veterans from Mrs. E. Abe, originally from Molokai.