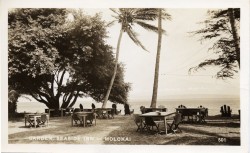 Molokai’s first banyan tree was given as a gift from Rev. William C. Love to Mrs. Sophie B. Cooke in 1908 and planted at the Molokai Ranch assistant manager’s house at Kualapu`u where the family had moved when her husband George P. Cooke began employment as bookkeeper and assistant manager of the American Sugar Company and its subsidiary the Molokai Ranch.  Later that year a young tree propagated from this banyan was planted at the shoreline of the Kaunakakai assistant manager’s house. This house was remodeled in 1945 and opened as the Seaside Inn, and remodeled again in 1950 as the Pau Hana Inn.

The first tree can be seen opposite Coffees of Hawaii on the east side of the highway. The second tree is located at the Molokai Community Health Center (previously the Pau Hana Inn).