Tuesday, August 8th, 2017 By Léo Azambuja, Special to the Dispatch 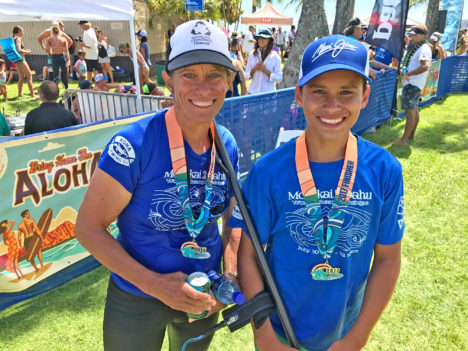 While many of us were relaxing at the beach a couple weekends ago, a mother-son team was putting a serious workout in the channel between Molokai and Oahu.

“I’ve got the channel bug now,” said Clare Mawae, who competed in the Molokai-2-Oahu Paddleboard World Championships alongside her 15-year-old son, Alex Mawae, on July 30.

Despite his young age, Alex is somewhat a veteran when it comes to Ka`iwi crossings. It’s his fifth time doing it, and three of those times were during the M2O race. He also brought home a first place medal in a mixed-team division a couple years ago.

“I just love the sport, it’s super fun,” said Alex, who is also a surfer.

He tried standup paddleboarding for the first time when he was 7 or 8 years old. At that time, Clare was running a children’s program called Youth in Motion. Alex grabbed a paddle and tried it while standing up on a regular longboard. He’s been hooked ever since.

Competing as a team requires water changes. Alex said jumping in the ocean in the middle of the channel was a bit sketchy, because the water was pitch-black. But the “bumps,” or ocean swells, were the best part. Though there weren’t any big swells, every now and then a six-foot “bump” would come along, and if you caught one, you could ride it for a long time, he said.

Clare was originally a windsurfer, and a few years ago she got into standup paddleboarding.

“I love being out there, being in the water, jumping in the ocean,” Clare said. “Now I’m inspired to paddle more. I must do it every week.”

She and Alex plan to train more together, and put “serious effort into it,” Clare said. Her son is a faster paddler, so just trying to keep up with him will make her a stronger athlete. But Alex has to train extra hard when he paddles with his mother. If he pulls too far ahead of Clare, he has to paddle back to her and then keep going, so he gets a hard workout too.

For now, they don’t have plans to team up again for next M2O, though the race is definitely on their list. They just might get different partners. Still, Clare said doing the M2O with Alex was the coolest part of the race.