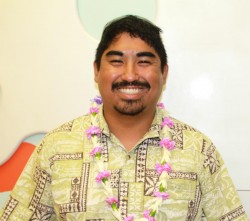 Jon Brito calls the summer he decided to take a break from pursuing his Bachelor’s degree a defining moment in his life. That was when he solidified his passion for conservation and natural resource management — a passion that’s now landed him a national honor. The 24-year-old from Molokai has been selected as one of the White House’s Champions of Change that recognizes those around the country who engage the next generation of conservation stewards — and one of only two youth leaders to be awarded.

“Jon’s commitment to the environment and his selfless mission to protect Hawai’i’s precious land and culture is inspiring,” said U.S. Senator Brian Schatz. “This high honor is well deserved and makes us all proud.”

Brito’s service to the island’s land and people has helped protect and restore countless endangered native Hawaiian species and habitats, and perpetuated Native Hawaiian knowledge and culture, according to a statement from Kupu, a Hawaii-based nonprofit that provides experiential education, job training and leadership opportunities for youth and young adults. In addition, Brito has inspired other local youth and community members to take an active part in the conservation movement on Molokai and beyond, the release states.

After graduating from Kamehameha School in 2008, Brito sparked his interest in conservation that summer working with Hawaii Youth Conservation Corps (HYCC), a program run by Kupu. For six weeks, Brito joined other youth pulling weeds and planting native species on Molokai, as well as doing some work on Kaho`olawe.

“It was empowering to make a visible, physical difference [and see a change in the landscape],” recalled Brito. “For a high school kid, that was a huge change from adding things on paper [while sitting in school].”

He went on to study at Humbolt State University in northern California, pursuing a degree in environmental resources engineering.

The next two summers, Brito was back home and working on the land through an AmeriCorps program with the Natural Resource Conservation Service at the Plant Materials Center in Ho`olehua.

It was during the following summer in 2012 that Brito decided to take a break from school. He participated in another HYCC program on Molokai, this time as a team leader, and stayed on the island that year, working at local nonprofit Ka Honua Momona through Kupu and AmeriCorps.

He said seeing kids come out of their shell was one of the most rewarding parts of the work. He watched youth go from standing on the side while pulling weeds to “getting on the front lines” by the end of the summer.

One of his proudest accomplishments is knowing where those youth are today.

“Some of the kids I worked with now have jobs in the field,” he said. “That’s very gratifying — [it reassures me] I didn’t waste my time.”

Last summer, Brito was asked to serve a second term as AmeriCorps team leader. Over the past few years, he has guided dozens of youth toward conservation and stewardship of the land. And it’s that dedication that got him nominated for national recognition.

In February, he was one of only six youths nationwide, honored with the distinction of Corpsmember of the Year at the national conference in Washington, D.C. of the Corps Network, a national youth leadership organization.

Then, the Corps Network nominated Brito for the Champion for Change award, in which he was one of 12 recipients across the country, and one of two youth leaders recognized. He recently returned from Washington, D.C., where he accepted the award.

Brito called winning “a bit of a shock.”

“It feels good,” he added. “People need to know about Molokai and what it stands for… The award doesn’t mean that much to me [but] it was the support from community and organizations across the country along the way to get to this point that really says a lot.”

Many have been full of praise for Brito’s work.

“We are extremely proud of Jon and what this accomplishment represents for Hawaii as a whole,” said John Leong, Executive Director of Kupu, “Jon is an example of what is possible for our youth when provided with programs like Kupu’s to unlock their potential  and benefit the community and environment throughout our state.”

In the meantime, Brito is back at school pursuing his Bachelor’s again, this time at University of Hawaii Maui College campus with a concentration in electronic and computer engineering. He’s also currently a fellow in Kupu’s Rewarding Internships for Sustainable Employment (RISE) Program, where he develops methods to make agri-businesses more energy efficient.

He said his goal is to combine his two passions of electronics and conservation. He’s also on the board for Innovation Day at the UHMC campus, an event on April 24-26 that will bring students together to share projects that highlight both sustainability and math and science fields.

Brito continues to encourage youth to pursue conservation and become more aware of the responsibility to malama the `aina.

“Anything you can dream of, you can accomplish,” he wants to share with students. “There’s nothing stopping you but yourself, and I’d hope you’d remember you’re connected to the land as you go about that. Remember what the land did for you and what you can do for your land.”

Brito would like to thank his family, Kupu, Ka Honua Momona, the Corps Network and the community of Molokai.