The final event of the Stand Up Paddle World Series was held at Turtle Bay on Oahu from Oct. 13 and 14. This year a new event was added called the Na Kama Kai Challenge. It was designed for the new to the sport and up and coming young racers under 15 years. Molokai’s Alex Mawae took first place in the event, while Josie Mawae claimed third.

Josie and Alex were excited to be part of this prestigious event. The Na Kama Kai Challenge was all about the kids with the pros helping out, while the young kids raced their version of sprints on the east side of Turtle Bay. The racing was done with an elimination format along with repercharge rounds with a running sprint at the beginning and the end of the race. Alex dominated all his heats along with his sister Josie. 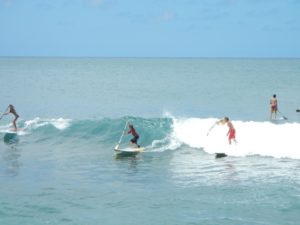 The finals came and both brother and sister battled it out for first and second place, along with fellow competitors Seachelle Rivereira and Sasha Kauhane. The four kids in the finals have consistently astounded the adults with their ocean skills both in the waves and their long distance racing. The young Naish rider Alex went onto a clear victory with Seachelle in second, Josie in third and Sasha taking fourth place.

This was an incredible way to finish off the season for Josie and Alex, having gained credible status with the professionals along with bonding with other likeminded kids who want to race.