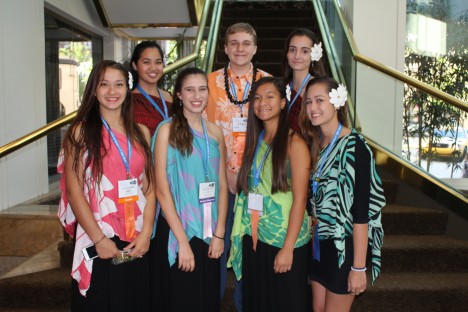 At the International Science and Engineering Fair (ISEF), an event that included around 1,700 students from more than 75 countries, five Molokai students spent hours being grilled by Ph.D. holders and Nobel Laureates. In a room full of geniuses, Molokai proved it is home to some of the world’s brightest young scientific minds.

In the Earth and Environmental Sciences category, Molokai High School senior Sarah Jenkins and sister Lily Jenkins, a sophomore, won first place and a $3,000 award. Their project, “March of the Molokai Mangrove,” charted the spread of mangrove along Molokai’s south shore and its potential impacts on the island.

“You meet these people from all over the world … and you realize they’re all just like you, and you’re all a little bit nervous to be there and all really excited after putting so many hours into your project,” said Afelin. “To see each other go up there and get rewarded is really an amazing experience.”

The five students, accompanied by chaperones as well as eighth grader and student observer Evelyn Haase, traveled to Pittsburgh from May 9-16 to compete at ISEF.

“It wasn’t as intimidating as I expected, but walking through rows of science fair projects where you can only understand a quarter of their board, that is pretty intimidating,” said Simon. 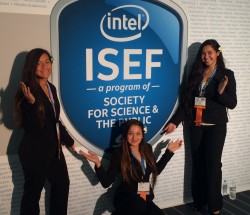 The students spent the first couple of days setting up projects and touring the city. On May 13, from 7:45 a.m. to 5 p.m., they underwent rigorous judging. They had 10 minutes to explain their projects to expert judges, an experience that Lily called “terrifying.”

“They don’t just sit there while you go through your speech,” said Davis. “They really drill you along the way. So just being able to respond to that is one of the biggest challenges we faced.”

Davis’s group answered questions from nine judges, while the Jenkins sisters had seven. In between, the students had a chance to get to know youth from multiple continents. They taught each other Hawaiian and Spanish, discussed each other’s research and, earlier in the week, got to exchange souvenirs from each other’s countries.

“It was a very interesting cultural exchange,” said Lily. “I actually really enjoyed it, ‘cause now it’s pushing me to learn another language.”

The Grand Awards Ceremony took place on May 15, in a stadium-like setting with thousands of finalists and parents. Both groups said they were so busy cheering for new friends that they weren’t even thinking about the possibility of winning awards themselves. When Simon, Davis and Afelin were called to the stage in front of the three live-broadcasting jumbotrons, they “probably screamed the loudest,” of anyone, said Simon. When the Jenkins’ first place award was announced, Lily couldn’t stop crying as she and Sarah helped each other onto the stage.

“It all ties back to passion,” said Sarah. “You realize that every person here isn’t just doing a project. They’re doing something that they’re passionate about. I think the judges saw that in our project. … We want to take it to the next level and continue our research to make a change.”

For these Molokai students, the passion will go on. Simon, Davis and Afelin hope to work with the University of Hawaii to do chemical analysis to test the quality of the agar. This summer they also plan to collaborate with OHA Trustee Colette Machado to educate and mobilize the community on gorilla ogo eradication. The Jenkins sisters also hope to continue educating their community on the effects of mangrove, seeking to implement a management plan for mangrove removal.

MHS principal Stan Hao said the girls’ accomplishments are further validation of their hard work and the support of the Molokai community.

“The assistance and the support we’ve been getting from our teachers and our partners and our parents are all helping,” he said. “… Whoever is involved in supporting any student that’s doing a science project or any project of some kind, it’s helping our students … to be able to stand head and shoulders with the rest of their peers.”