Primary Election day is coming up this Saturday, Aug. 13. Your vote is your voice and one of the most powerful forces to shape the future by electing a representative government who will make decisions which affect you, your family and your community. This year, many Molokai candidates appear on the ballot. While some of them, such as the Molokai seat for the Maui County Council, won’t appear until November’s General Election, the primaries are an important opportunity to vote for who you think best represents your vision for the future.

The options can be confusing, though, and seeing the ballot for the first time at the polls can be overwhelming if you’re not prepared. So to help you get ready for this year’s primary election, the Dispatch has compiled a list of the candidates that will appear on Molokai ballots.

If you can’t make it to the polls, walk-in absentee voting on Molokai is being held at the Mitchell Pauole Center between 8 a.m. and 4 p.m. (closed 12 to 1 p.m.) Monday to Friday until Thursday, Aug. 11.

Who: You must be a registered Hawaii voter to cast your ballot.

What to bring to the polls: A valid photo I.D. with signature, such as a Hawaii driver’s license or state I.D. card.

How: When voting in the primary, you must select one party in the “Select a Party” section of the ballot, and then vote only for candidates of the party you selected. If you don’t select a party and you vote in more than one party ballot, your vote will not be counted. Offices such as Office of Hawaiian Affairs and county officials have no party restrictions and you can vote for anyone. Review both sides before voting. Fill in the box completely to the left of your choice. 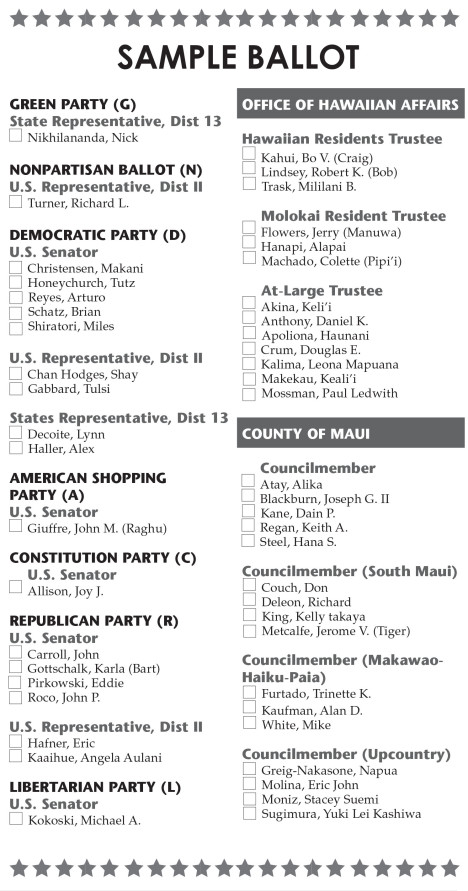