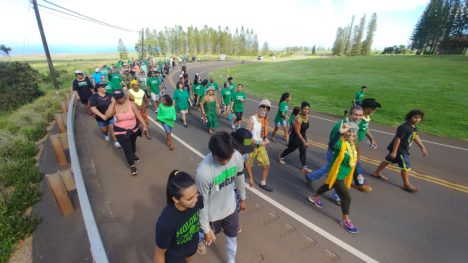 Loretta Ritte, waving and wearing a yellow lei, walks alongside her husband, Walter Ritte, and Jimmy Duvauchelle, wearing a hat, in front of aproximately 200 walkers at the six-and-a-half mile Unity March from Mahana to Maunaloa Oct. 28. Photo by Léo Azambuja

The botched proposed development of La‘au Point that a decade ago caused so much division on Molokai, pinning neighbors, friends and families against each other seems to finally have been laid to rest. Or at least that was the message spread among more than 200 community members who attended the Unity March Nov. 28.

“In the past, we had our differences but whatever that was, let us put that aside so we can come together as a family,” said Jimmy Duvauchelle, the oldest walker at the march. “The community will come together and will work together for the betterment of our people.”

The Unity March, organized by the movement Molokai Pule O‘o, started early in the day, at about 6 a.m. at Mahana. Participants walked to the top of Kaluakoi entrance, where more people joined them to walk together to Maunaloa Elementary School, where a large party with free food and music awaited everybody.

A few weeks ago, Molokai Ranch put its assets on the market for about $260 million. The Ranch’s nearly 56,000 acres represent roughly one-third of Molokai. Matt Yamashita, one of the event’s organizers, said this sale will impact the future of Molokai. The goal of Molokai Pule O‘o is to bring the community together to present a unified vision to a prospective buyer of the Ranch.

“We need to be proactive,” said Yamashita, adding the people need to step forward as one to welcome a buyer who is in line with the community. Much of this vision is already laid out in the Molokai Ranch Master Land Use Plan, in which more than 1,000 community members participated more than 10 years ago.

“That was some really amazing work this community did,” Yamashita said of the plan. The plan is ready to be presented to any new buyers, who should see the community as partners and acknowledge them as their biggest stakeholders, he said.

Walter Ritte and Duvauchelle stood on different sides during those long-gone La‘au Point days, but at the march, they walked alongside each other in front of the pack. Ritte said the meaning for the march and the event in Maunaloa was to bring unity to the whole island. Carrying an extensive resume as a Hawaiian rights activist, Ritte praised the younger generation of Molokai residents who are taking a stance to protect the island.

“The next generation has proved they have what it takes to keep Molokai Molokai,” Ritte said.

For 30 years, he said, he and others have been trying to protect Molokai, and now they are ready to move forward. Ritte said before the dies, he wants to make sure the words of George Helm come true – that Molokai one day becomes its own county. Helm was a Molokai musician and Hawaiian activist who disappeared at sea in 1977 along with Kimo Mitchell. Both, as well as Ritte and a few others, were part of a group who protested against the Navy using the island of Kaho‘olawe as a bombing target.

Ritte said Molokai has two economies, including a subsistence economy. Island residents, he said, now have the ability to produce the future they have been planning for many years. The event last week was one of many steps for Molokai to build its future, to become a separate county with its own sustainable economy.

“We’re going to get there,” said Ritte, adding Molokai residents can feed their own families with the island’s resources. “We are those natural resources, we are the land, we are the truth.”

The gathering at the lawn at Maunaloa School lasted until 2 p.m., with plenty of free chicken hekka, rice and macaroni salad, plus entertainment from local musicians Lono and Sashamon, and also Penideen and Wayne Enos of Natural Vibrations, Paula Fuga, Jah Maoli and others.

Malia Akutagawa, one of the organizers who put the event together in only three weeks, said she thinks there will be a lot of changes throughout Molokai, and all because of its people.

“We are creating the right energy that’s going to bring the best results for our island,” Akutagawa said.