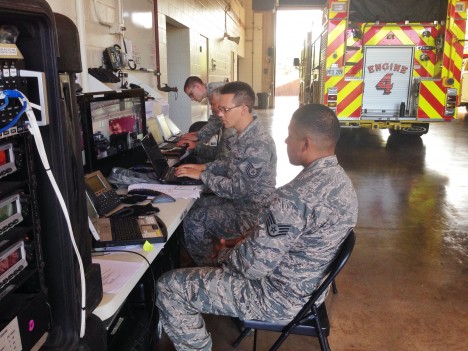 The National Guard demonstrates an emergency communication system that would allow Molokai to communicate with first responders across the state during a disaster. Photo by Bianca Moragne.

Imagine this: A destructive hurricane is spotted in the Central Pacific Ocean south of Molokai with wind speeds of more than 100 miles per hour. Once it hits land, the hurricane delivers a storm surge of destructive winds that leave many residents without electricity, shelter, food or water — and wipes out the island’s communication systems.

The annual HSCD training, called Makani Pahili, consists of drill tests that improve disaster readiness for first responders on each island. Although Makani Pahili has been conducted by HSCD since it began in 2007, this is the second year that the training has come to Molokai, with the help of the California Air National Guard.

“It’s a positive thing that needs to be done,” said Maui County Fire Inspector Rick Schonely at Kaunakakai Fire station. “Molokai is unique because we are kind of separated from the other infrastructures on the bigger islands. This type of situation with the Air Guard coming in and providing this service is extremely important.”

“For this scenario [the HSCD] has the hurricane hitting very south and streaming right through every island,” Kinney said. “Now in the past, no hurricane has done that, so it’s a long shot. It is catching every island so every island gets a play in this important exercise.”

Last Wednesday, the National Guard unit, which came to Molokai from San Diego, Calif., brought two communication systems to Kaunakakai Fire Station, creating a command center. Molokai fire fighters, police officers and members of the Emergency Action Committee gathered with the squadron to learn about the systems and do drill tests at five workstations.

One system is called a Broadband Global Area Network (BGAN) that will be housed at the fire department. According to Alex Bivin Senior Airman, the fire department can deploy the small, battery-powered box system in a matter of 15 minutes which will power one computer with Internet access and an emergency telephone. The system can be set up anywhere on the island or offshore because it runs on a satellite feed, Bivin said. Maui County currently has four BGAN systems to be used be in civil defense.

“It’s specifically designed for disaster and really expeditious communication,” Bivin said. “This isn’t super in-depth and technical so it was easy. These guys [Molokai firefighters] got it pretty quick, but it was made to be that simple and quick, so the training went really well.” 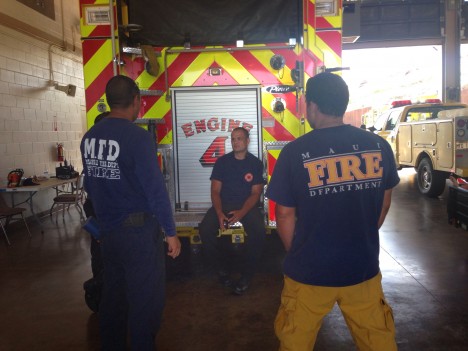 Molokai fire fighters and other first responders get hurricane ready at this year’s Makani Pahili drill. Photo by Bianca Moragne.

The second contraption looked like a series of large TV screens strung together with a massive switchboard of buttons, lights and knobs.  Called a Joint Incident Site Communications Capability (JISCC), the system is provided to Federal Emergency Management Agency (FEMA) Region 9, which includes all of Hawaii and the West Coast. The JISCC system belongs to the National Guard.

The JISCC allows first responders on separate islands to continue communicating with each other across the state, Kinney said. With the loss of landlines, cell phone service and Internet, the system brings those devices back to life — a critical capability for the island chain. According to Kinney, first responders would be able to talk and email with anyone else who is linked into the system — via satellite or high-frequency radio airways. The system is capable of connecting 15 laptops with video teleconference capabilities.

The system will handle NIPRNet, (Non-secure Internet Protocol Router Network), a type of military Internet, Kinney said. If another army unit comes to provide aide, the NIPRNet will provide them with the military network separate from the commercial network that is given to first responders.

Currently, one JISCC is allocated for use throughout Maui County and is housed on Maui. The system brought to Molokai will return to Calif. after Makani Pahili is completed. Kinney said in the event of a hurricane, a JISCC can be flown over to Molokai.

“If only Molokai had an issue and needed this equipment, [FEMA] would deploy their equipment over here via helicopter to bring it in,” Kinney said.

If Maui, Molokai and Lanai are all hit, a JISCC will be brought to Molokai from Hawaii Island or Oahu. However, if all of the Hawaiian Islands are hit, FEMA will reach out to the 147th Squadron to fly one over.

“Of course, we’re in California so it will take some time to get here,” Kinney said. “It all depends on if Hawaii reached a state of emergency and if it got federally funded and FEMA got activated.”

According the Kinney, in the event of an emergency, FEMA will airlift members of the California National Guard over to Hawaii to deliver the JISCC equipment and assist the Hawaii National Guard. As soon as the squadron gets notified, it takes them four hours to pack up and be ready to be lifted up. Once in the air, it will be a nine-hour flight from California to Hawaii via military aircraft.

Whether Molokai will get the chance to use the communications systems may never be known, but Bivin said the entire exercise is worth the experience.

“[Molokai locals] have been incredibly friendly and I think they greatly appreciate our presence here which is good,” Bivin said.

The National Guard from San Diego will be visiting Maui for their next and last stop. They leave Hawaii and complete the hurricane preparedness training on June 10.

“We take disaster preparedness very seriously,” Schonely said. “Any time we can get together and practice and train for the event then its a bonus. We enjoy having them and the training is very beneficial.”