“It was one of the best experiences of my life,” said seventh-grader Noah Keanini.

The students were on Oahu to compete in a First Lego League robotics competition. They previously met Shipyard Commander Capt. Brian Osgood in 2011 when he was a judge for the competition. Osgood was so impressed with the students that he extended an invitation to visit the Shipyard and tour a submarine.

“I was thrilled we were able to make the visit a reality and show these great kids some of the engineering and technology that we employ at the Shipyard and submarine fleet,” said Osgood. 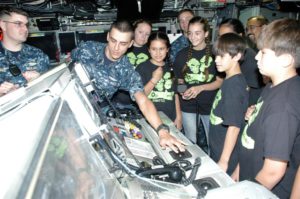 Sailors from USS Hawaii show the students the periscope view screen during a tour of the submarine. Photo by David Tomiyama.

The day began with a quick overview of the Shipyard’s mission along with questions and answers with various Shipyard staff. They then headed to the waterfront to check out some of the facilities.
The students stopped at Dry Dock 4 for a close look at the inner workings of the pump well. The pump well houses the main pumps that discharge millions of gallons of seawater out of the dock, and drain pumps that automatically maintain a dry, waterless “tub” like area. The empty dock allows workers to execute ship repair and maintenance that could not otherwise be done if the ship or submarine were water borne.

“The pump well was really cool,” said seventh-grader Caele Manley. “I learned a lot on how it works and what I need to do to be an engineer.”

Another highlight of the visit was a pier side tour of Hawaii. The submarine recently returned to Joint Base Pearl Harbor-Hickam, Hawaii, from a six-month deployment to the western Pacific. Crewmember Machinist Mate 1st Class Kevin Dillon showed the group the submarine’s control station, berthing areas, topside sail, crews mess and torpedo room.

“The tour was pretty awesome,” said eighth-grader Erik Svetin, Molokai Middle School eighth grader. “I was really surprised at how small the bunks were.”

The visit gave the students a glimpse of where their still-developing STEM skills can take them.

“STEM principles, which these Molokai students have a good grasp of, are the foundations of the U.S. Navy,” said Osgood. “STEM is the path to problem solving, and we use it every day in technology focused areas like the Shipyard and the Navy as a whole.” 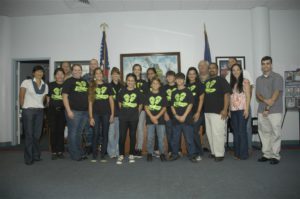