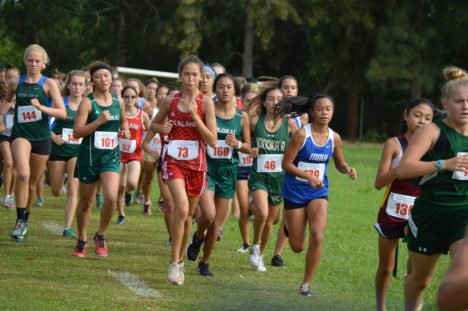 The Farmers had four qualifiers and two alternates who traveled to the Garden Isle with coaches Kabbie Bicoy-Juario (girls) and Mahina Hou Ross (boys). More than 400 runners from all islands went competed on Kauai.

For the boys, Caele Manley finished in 141st place with a time of 19:42 and Rockwell “Kaina” Adolpho finished 184th with a time of 20:25. Manley and Adolpho are both seniors.

The two alternates who traveled but did not get to race were senior Ikua Deponte and junior Alex Mawae.

First-year girls coach Bicoy-Juario was happy with the results and the season, “Finishing up at states in Kauai was a very intense race for our Lady Farmers. Both Ale‘a Davis and Keeya Bicoy are sophomores at Molokai High and ran an outstanding race. Running with a total of 200 runners in the girls’ event, they accomplished what they set out to do. Well done this season by both the boys and girls cross country teams. It was a great season and thank you Molokai for the big support thruout the season.”