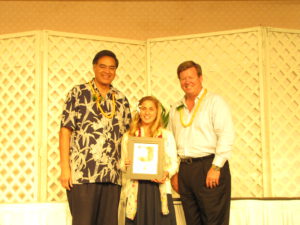 Forty-two seniors, one from every public high school in Hawaii, received Citizenship
Awards on April 12 in recognition of their service to school and community. Molokai’s Charisse Manley of Molokai High School received the award, sponsored by Chelsea Group Limited.

The Citizenship Award, which marked its eighth year, is a collaboration between the Hawaii Lodging & Tourism Association, Honolulu Star-Advertiser, and the Department of Education.

A $1,000 scholarship was awarded to a top senior from each school. Recipients are standouts among their classmates, though not necessarily by dint of their scholastic achievements or other traditional yardsticks. The award honors those young people who have contributed to making Hawaii a better place and who best exemplify the Department of Education’s vision of a model public high school graduate who, among other things, exercises the rights and responsibilities of citizenship.