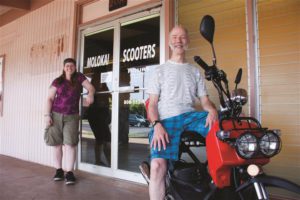 Owner David Kelly pictured on one of his for-rent mopeds with wife Jane in front of their new business. Photo by Leslie Hibner

With gas prices on the rise, Molokai Scooters may be just what residents and visitors to the island need. Oregon natives David and Jane Kelly are opening the moped rental store next door to the Bank of Hawaii in Kaunakakai, with an expected start date of April 9.

With years of experience in the retail business shared between the two, the Kellys are hopeful for the future of Molokai Scooters even before its official opening. They currently have a fleet of 20 mopeds available for rent with a 50cc engine –an engine small enough to operate with only a driver’s license under Hawaii law. The vehicles reach speeds over 35 mph, and are able to get upwards of 50 miles per gallon, according to David.

“In business, everything takes longer and costs more,” he said. “But a delightful surprise [has been] the friendliness of the people here on Molokai.”

After receiving over 50 job applications and conducting 15 interviews, the new business has hired five new employees from Molokai to work as rental agents, among other responsibilities, according to David. They hope to increase their staff as business picks up, he said.

There have been other scooter companies that have tried similar operations in the past, but liability issues became a problem, according to Penny Steinhoff, operation manager for neighboring business Mountain Slopes Water. “It’s a good idea because gas is so expensive, but I don’t know if it’ll work,” she said.

“I think [scooters] are a great idea,” said Molokai resident Lisa Stilley. “With gas, you can go a lot further on a scooter than you can in a car.”

The Kellys hope to permanently move to Molokai later in the year, but are currently still residing in Oregon, said David. He hopes in the future to expand and incorporate the use and sale of scooters with larger engines.

“First and foremost, our goal is to give local folks and tourists a way to have more fun,” he explained.

Molokai Scooters rental rates are $39 for a half day and $59 for a full day. For more information, call 553-4400 or visit molokaiscooters.com.