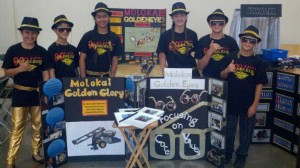 “Senior Solutions,” and students were challenged to invent technological innovations to improve the quality of life for the elderly. The Molokai Golden Eyes, coached by Kawika Gonzales and Jenn Whitted, will compete in the state championship on Dec. 1 at the Neil Blaisdell Center in Honolulu.

Both teams were funded by the Maui Economic Development Board and Women in Technology program.