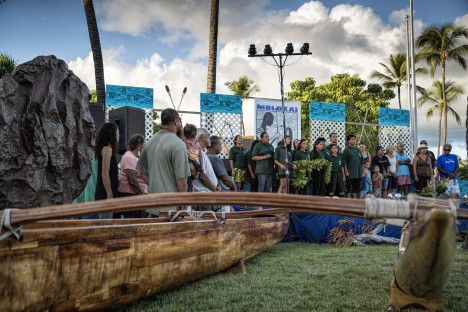 The Kulaia festival two weeks ago revived a historic tradition of aloha surrounding the annual canoe races during which paddlers and community would gather together. Pictured here, Hawaiian immersion students participated in the celebration that closed Kaunakakai’s main street for the festivities. This coming weekend, the spirit of Kulaia will be carried forward during the Festivals of Aloha events and Sunday’s Molokai Hoe canoe race. Photo courtesy of Lori-Lei Rawlins-Crivello

Historical records dating back to 1865 note Hawaiian outrigger canoe race competitions as one of the many events our kupuna took part in during annual la kulaia, days of festivities honoring the Kingdom of Hawaii and especially honoring our beloved monarchy.  During that era, kulaia generally occurred once a year during a national holiday or birthday celebration of a mo`i (monarch).

After the overthrow of our beloved Hawaiian Kingdom, kulaia festivities changed focus and no longer celebrated the Kingdom and monarchy.  In historical records, we see the shift from national celebration to simply canoe race competitions.  Therefore, pieces of our historic kulaia were lost and forgotten.

In the early years of the Molokai Hoe along with the Aloha Festivals Ho`olaule`a at Hale o Lono, Molokai had its own version of the historic kulaia.  The festivities lasted for a weekend with campsites from one end of Hale o Lono to the other and the spirit of `ohana and aloha radiated. Molokai `ohana, paddlers, visitors, spectators, and many others who came from the neighbor islands, outer states, and other countries all gathered together.

In recent years, history was repeated; the idea of kulaia was forgotten, as the canoe races continued without the festival.  Wanting to revive the spirit of the festivals here on Molokai, a grassroots community group formed the Molokai Canoe Festivals Committee, whose members share the vision of bringing back the festivals to our community and sharing the true Molokai aloha and hospitality to our visiting brothers and sisters of the paddling `ohana.  This practice of kulaia is an important cultural tradition that connects us to our ali`i and our kupuna.

In honor of Molokai’s historic kulaia, on Friday, Sept. 19, Molokai hosted its first annual Kulaia event in a downtown block festival welcoming more than 2,000 attendees to an atmosphere of excitement and aloha. Molokai has never seen the street entering Kaunakakai town closed down and lined with an array of food vendors, merchandise and craft artisans and cultural practitioners in the middle of the street.  An ocean and paddler-themed stage with lighted torches was complimented by Molokai’s very own koa canoe, Kuaha`amakealapono.

Spectators arrived early in abundance to get a spot before the setting of the awesome sunset which calmed our evening ahead.  Molokai’s own `O Hina I Ka Malama Hawaiian Immersion Program opened up in Hawaiian protocol followed by the blessings of Kahu Jimmy Duvauchelle with pule.

Recognition of Molokai crew members (Eric Ko, Keoki Pescaia, Mahinahou Ross and Mel Paoa) leaving on their Hokule`a Malama Honua World Wide Voyage this month were part of our opening ceremony with special honors focused on Mel Paoa Jr. who has been a crew member sailing on the Hokule`a for more than 30 years. Molokai sends them blessings for a safe journey and return home.

Alaka`i Paleka and Kevan Dudoit from Maui’s 93.5 KPOA emceed the festival and kept the crowd entertained and laughing.  Moana’s Hula Halau captured all with their lovely performances throughout the night followed by the soulful voice of the awesome Kawika Kahiapo. Molokai’s songbird, Raiatea Helm, was preceded by a surprise honoring one of Na Wahine O Ke Kai’s founding members, Aunty Hannie Anderson, one of Hawaii’s most influential contributors to the sport of canoe paddling while perpetuating the Hawaiian culture. She was presented with a proclamation by Molokai’s County Council Women, Stacy Helm Crivello, on behalf of all nine Maui County Council Members, followed by a special song serenaded to her by Raiatea’s sweet voice.  We were also graced by the performances of Na Pua Ho`oheno (Uaia-Keola, Pookela and Awapuhimele Hamakua Napoleon) and Ho`okena.

At the evening’s end, it was amazing to see our Molokai kupuna like Aunty Kauila Reyes, Aunty Julia and Uncle Herbert Hoe and Aunty Jane Lee still smiling in the crowd, making it all worth it.  Our kupuna of the past were surely present as the event took on a life of its own as our community, visitors and paddlers for the Na Wahine o Ke Kai felt the true Molokai spirit and Aloha of the Friendly Isle we are known for.  Seeing the crowds stroll through town stimulating our economy and meeting our community was truly a treat to see.

Kulaia gives Molokai the opportunity to be the true host of the Na Wahine o Ke Kai and Molokai Hoe International Championships of Outrigger Canoe Races and to embrace the platform to share with the world who we are.  As the Molokai Hoe approaches, another fun-filled festival has been planned which is coordinated by the Festivals of Aloha (Racquel Dudoit) in partnership with The Molokai Canoe Festivals in the spirit of Kulaia at the Kaunakakai Ball Park.