Education was a priority for Liliana Napoleon. After overcoming a decade’s worth of challenges, the Mana`e resident received her master’s degree in Business Administration (MBA) last semester.

She attained her bachelor degree from Western Governors University (WGU), an online, nonprofit school with over 39,000 students nation-wide.

When she completed a double associate degree from Molokai Education Center in 2004, her plans were to continue her education through the University of Hawaii system. But when her father fell terminally ill, her plans changed.

“Those who have been touched by cancer truly know that this disease does not sleep,” she said, noting the constant care she devoted to her father. “Therefore, the traditional classroom setting with scheduled class dates and times just wouldn’t seem to work out for me.” 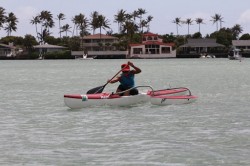 Napoleon started searching for an online school and found that WGU was right for her.

“After a long and grueling six years of attendance, I am pleased to say that I am now a proud graduate of Western Governor’s University.”

She said she encourages others to pursue higher education as a key toward a prosperous life. She plans to attain an on-island career that will allow her professionalism, positive attributes, skill sets and talents to flourish.

Napoleon’s accomplishment was recognized at the February 9 commencement ceremony in Atlanta, Ga., with former Florida Governor Jeb Bush delivering the commencement address. The ceremony was streamed live through the WGU website.