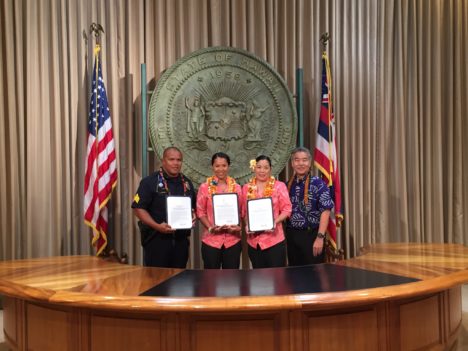 Two Island Air flight attendants and an off-duty Molokai police officer were recognized for recently coming to the aid of a woman in need of medical attention at the Honolulu Airport Commuter Terminal.

On March 6, 2017, Island Air flight attendants Wendy Nakamura-Chan and Shanay Coloma witnessed a medical emergency at the Commuter Terminal. The two flight attendants, who were on reserve assignment at the time, immediately responded when a 50-year-old female passenger became unconscious and unresponsive. With the assistance of Kyle “Ikaika” Bishaw-Juario, an off-duty police officer from Molokai who was waiting to board a flight, Nakamura-Chan and Coloma used an automated external defibrillator located in the terminal to revive the passenger. The woman regained consciousness and was taken to a nearby hospital for further examination. She was released from the hospital and was able to continue her family vacation on Maui the following day.

The three individuals were honored by Mayor Alan Arakawa and Gov. David Ige. Arakawa also declared June 1-7, 2017 as “CPR / AED Awareness Week” to highlight the importance of learning how to properly administer CPR and use an automated external defibrillator (AED) to save lives.

“Island Air flight attendants Wendy Nakamura-Chan and Shanay Coloma and Officer Bishaw-Juario exhibited true compassion and aloha when they came to the aid of a stranger,” said Arakawa, who presented the three individuals with letters of commendation. “Their quick action highlights the importance of being trained in lifesaving skills such as CPR and the use of automated external defibrillators, when seconds matter and lives are at stake.”