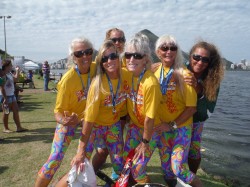 This year, Brazil hosted the Va`a World Sprint Championships, races held in locations around the world every two years among the world’s best paddlers.

“It is always a proud moment to stand on the podium and receive the gold medal or any medal for Hawaii,” said Martin. “To stand there and see the Hawaiian flag flying first and highest and to hear ‘Hawaii Pono`i’ being played and then to know that not only are you standing there for Hawaii Nei but also for our Molokai Nui a Hina is a great feeling.”

Since 2004, Martin and Kimball have raced in the event with the Island Masters A team at the World Sprints since 2004. The crew won gold in the age 60s category double hull race, as well as the six-man 500 meter and 1000 meter events. They also placed first in the 50s double hull and second in the 50s 500 and 1000-meter races.

Egusa, who has attended two World Sprints in the past, paddled this year with the Island Masters B crew and earned two bronze medals.

For other Molokai paddlers, this was their first time at the event.

Paoa said she decided to form a crew of Masters women paddlers who, while they have seen success at state championships, never had the opportunity to paddle in the international field. The crew, paddling as Wa`akapaemua, consisted of four Molokai women and three from Kauai, Oahu and Hawaii Island. They won gold in the 40s double hull and bronze in the 50s double hull. 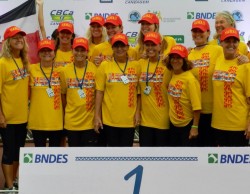 The seven women were among the 93 teams from Hawaii in Brazil, said Paoa.

“Our experience was wonderful from start to finish,” she said. “School kids would run to us and wave… I didn’t expect how beautiful, how clean and how friendly the people… I would go again in a minute.”