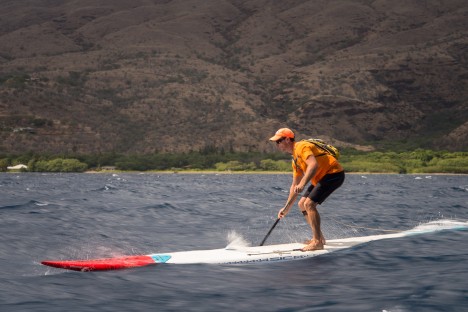 Molokai is prominent in the paddling circles whether it is OC1, OC6, Ski or SUP as Molokai is hailed as the official center of the World Championship long distance paddle races. Molokai 4 Molokai was conceived after watching one too many events finish on Molokai and competitors leaving soon after. The 8.5 mile race course continued on from where the former Molokai Holokai race left off and prior to that the Molokai Challenge.

This year there were two courses, long and short, and four categories with 12 divisions. The event was blessed with the presence of Keith Reagan, Herman Andaya and Sharon Zalsos from the County of Maui at the start of the race. Kamalo Harbor was bustling with activity. Following a beautiful pule by Clay Ching, the SUP paddlers started at 2:30 p.m. with a sea of orange shirts making a beautiful contrast against the blue of the ocean. The OC1s started out at the Kamalo buoy 15 minutes later, and the short course paddlers took off from Kakahaia Beach Park 30 minutes after the first start.

Jeremy Riggs from Maui took the honors for this year’s SUP race, with Vinnie Martins from Brazil in second and Tomo Murabayashi from Japan taking third place overall. In the women’s SUP division, it was Gail Walker from the US  Virgin Islands, Lena Ribeiro from Brazil and Youth In Motion’s 2015 team member Kali`a Alexiou in third. Both Alex Mawae and Kali`a took the win in the Juniors division.

The OC 1 race was between two local boys Kamakou Mariano and James Puaa Spencer fighting it out in the last mile, with Kamakou taking the final victory. James took second and 16-year-oldold Jake Samaniego in third. The Molokai women were just as intense with Liliana Napolean taking the overall win, Camie Kimball in second and Desiree Puhi in third.

The short course consisted of the recreational paddler and this was an awesome group. They paddled for fun but yet had the competitive and fun spirit keeping the grass roots of paddling alive. Winning the short course was Kana Marutani from Japan.

M4Molokai was claimed by many as one of the best events in Hawaii. Everyone had fun, from the racers to the spectators, the community to the sponsors and entertainment, to the chefs and volunteers. This race was all about Molokai and after all, Molokai is hailed as the center for the World Championship races of long distance paddling.  Molokai4Molokai will be back for 2016.