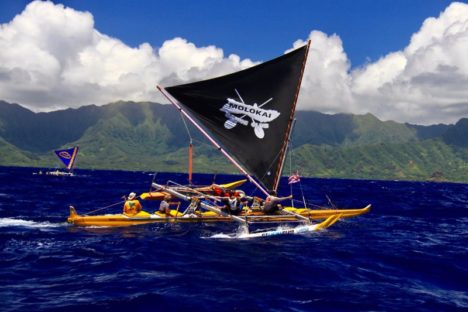 Paddlers from Molokai Canoe Club placed first in the open class of a Hawaiian Sailing Canoe Association race between Kaunakakai and Kailua, Oahu on Saturday, July 8. They also won the division race the following day between Kailua and Haleiwa. The team clocked in on Saturday finishing the race in 7 hours 1 minute, while they swept Sunday’s competition in 4 hours 23 minutes.

The mission of the nonprofit Hawaiian Sailing Canoe Association is to revive and practice the ancient Hawaiian skills and values learned in sailing canoes. The association holds public educational and sailing events in the state, according to organizers. It also hosts an annual racing series throughout the islands, starting in April on Hawaii Island and ending on Kauai in September, with stops on Maui, Molokai and Oahu.