Molokai Mom on a Mission 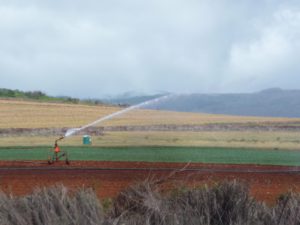 As beads of perspiration gathered across my forehead, I realized it was unusually hot for a 7:30 a.m. morning walk. I peeked through the top of my stroller, and thank goodness my little one remained unaffected by the heat. Instead, he babbled gleefully and pointed to nearly everything in sight.

Some mornings I’m faced with a relentless wind or an unexpected rain shower, but with a plastic weather guard over my child’s stroller, he remains protected from the elements. As for me, I can stand to be without warmth and feeling uncomfortable, as long as through it all, my child remains unaffected.

This led me to wonder. What about other aspects of my children’s lives? Protecting them from Mother Nature is one thing, but what about the larger, more dire issues that are beyond my control?

For instance, I can’t just slip a plastic guard over my house on days like January 15th, when toxic dust from Monsanto’s corn field invaded my home. Don’t think the dust is toxic? According to Prison Planet, “Monsanto’s Roundup and modified ‘biopesticide’ known as BT were found to be killing human kidney cells, actually exhibiting direct toxicity to human biology.”

The Huffington Post also reported, “As long ago as 1980, glyphosate, the chemical on which Roundup is based, can cause birth defects in laboratory animals.” Another study released by the International Journal of Biological Sciences, analyzed the effects of genetically modified foods on mammalian health. Researchers found that Monsanto’s genetically modified corn is linked to organ damage in rats, particularly the kidney and liver. This is frightening stuff!

If it takes wearing a cap with “MONSANTO POISONS LIFE” every day, in order to heighten awareness, then I’m going to do it! I’m a “Molokai Mom on a Mission,” determined to see that our children and future generations remain unaffected by the impact of corporate greed for power and profit.

Something to remind ourselves: “Most of the important things in the world have been accomplished by people who have kept on trying when there seemed to be no hope at all.” – Dale Carnegie.

Caption: This picture was taken on Saturday, April 28, 2012 at 12:18 p.m. If I’m not mistaken, the optimal time for watering plants outside is before 9 a.m. or after 5 p.m., not mid-day when the temperature peaks and evaporation occurs most rapidly. As you can see, Monsanto is not practicing responsible farming nor are they being considerate of the neighboring residents and farmers who all share the same limited water supply, during this season of drought.

2 Responses to “Molokai Mom on a Mission”