Under the umbrella of STEM, the award recognizes the accomplishments of MMS across all STEM-related efforts and programs including Robotics, Science Fair, Bridge Building, Math Counts, and STEM Conference.

The STEM institutional awards ceremony recognizes outstanding students, educators, and participating schools from Hawaii’s various STEM organizations. By acknowledging institutional accomplishments in addition to individual achievements, STEM week pays tribute to collective school efforts and commitment towards STEM exploration. Awarded schools are chosen based on quantitative rankings of performances in Hawaii’s STEM programs, on award winners, and on respective levels of student, teacher, and volunteer engagement (stemweekhawaii.org/wordpress). The awards event was led by the Hawaii Academy of Science and supported by the State of Hawaii Department of Land and Natural Resources. 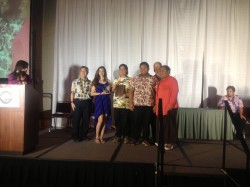 The student attendees from the MMS STEM program known as KLAP 4 STEM were (K)anani, (L)ily, (A)wa and (P)ono. They shared reflections from the experience.

“I wasn’t expecting [second place] at all,” said Kanani Ah Van. “We were like all just sitting there like, ‘Can we go, we’re not getting any awards.’ They did district awards and we weren’t getting anything, so we were all nuha! So we wanted to leave, but to our surprise we won second in the whole state!”

Awa Yerhot was thinking, “Did they just call us! What? We got an award? Why us? What did we do to get the award? How did we get an award?? Did you call the right school?”

“When I was at the STEM dinner I was drained from a long day of science fair and was ready to go back to the hotel and crash,” recalled Lily Jenkins. “But as soon as they called our school’s name up I was energized, and I couldn’t stop smiling! I was extremely proud of the thought and reality that our school was named the second place Middle School for Outstanding STEM Commitment and Leadership at the state level! Small schools can make a big difference and impact on the community!”

The 2013 MMS STEM Team now heads to Wailea, Maui this weekend on April 19 to participate in the 2013 Hawaii STEM Conference (womenintech.com/HawaiiSTEMConference).